It took Karoz 3 days to build another spacecraft. He improved the design; made the pressurized module safer.* He felt it fate that a relatively unimportant character like John Lockfry was sacrificed for a greater good. He will be assigned the status of a martyr — Karoz will make sure of that.

For the second attempted flight to the moon, a prim and proper one this time, Karoz recruited Baker Bloch to accompany him.

“The first multi-man journey,” proclaimed Karoz, standing in front of the rocket launcher across Central Stream from him. “But it will be tricky, as I’ve explained. I’ll sit in the rocketship first to launch it, and then when it is in the air you’ll have to quickly sit in the craft as well. Else you’ll miss the trip.”

“Yes, we’ve been over this many times. I’m prepared as much as I’ll ever be.” Baker Bloch hadn’t told Karoz that he had done all this before back in Rubi’s VWX Town. He didn’t want to confuse or distract his friend any more than necessary in these times of heightened emotions. Indeed it will take some concentration to pull this off. And John Lockfry wasn’t any more dead than anyone else in Collagesity, including Karoz and himself. But of course he hadn’t voiced this either.

“Do you have your draw distance set at 200 meters like I suggested to follow me further into the sky if needed.”

“Okay, are we ready?” Karoz peers up at Baker Bloch.

“Do it,” states Baker Bloch levelly. He has no deep worries, but still is nervous. He wants to locate and sit in the ship as soon as possible after it clears the house.

Karoz stretches his arm toward the launcher, bringing the menu up. “Three, two, one… SIT!” Karoz disappears from Baker’s side. The rocket fires. Baker waits for the clearance of the ship.

The capsule flies upward much quicker than expected. It is already well over 100 meters in the air before Baker Bloch even spots it. Desperate, he tries to touch and sit, but it is too late. The ship is gone. “Darnit!” he says, truly frustrated.

Karoz is on his own. Baker Bloch realizes he’ll have to deal with Baker Blinker now, who won’t take the news well. She was depending on him to make sure Karoz was safe and out of harm’s way. But nothing could happen to his old friend. Could it? 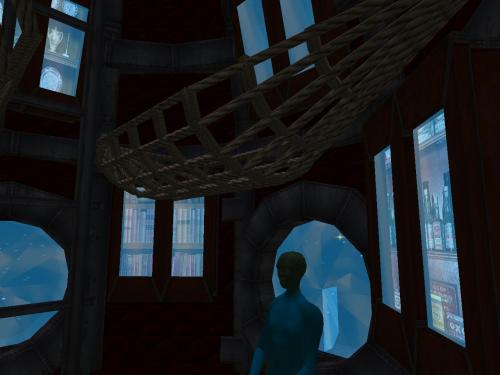 “I *knew* it! Overconfident dickhead.”

* One of the most important changes Karoz made was reducing the 100-percent oxygen environment of the module, originally intended to lower the weight, with a mix containing about 34 percent oxygen, and making the spacecraft’s walls significantly thicker to handle the increased pressure.