The complete pot or, more precisely, pressure canner or pressure cooker. Looks like about a 40 quart one based on comparisons with this similar item.

The point I want to make with the following photo is that I found the pot not in 2 pieces but 3, with the bottom removed as well as the top. It took me a minute to even associate the bottom and sides of the pressure canner together when I found them close to each other almost 3 months back now. As regular Bigfoot event readers will already know, the top was procured from the Plateau of Raw Art in the fall, and was prominently featured in the October art happening at Bigfoot Proper (BP). One of the odd things about this is that I’m not sure where I found the top — memory doesn’t serve me for that more distant event. It *could* have been near the sides and bottom, perhaps in front of the fence that they, in turn, were then found behind later on. I just don’t have clear recall.

Below you can see the crack all around the edge of the bottom where I had matched it with the sides again. The canner is a magical 3-in-1 item. It represents Chesterton rising to at least equal importance to Bigfoot Proper in the long term happening that the overall Bigfoot area is becoming. Little Vincente looks on, alternately staring at and admiring each. He can’t weigh in on an ultimate judgement either. It’s like choosing one parent over another, which no kid likes to do. But I think Chesterton will win out in the end, as one sex rises to prominence over the other. I think it is the feminine.

Speaking of females — this is another weird thing that happened. Remember in the Bigfoot related picture post just before this one that I was quite shocked to find both of my toy tigers still standing on a small stone after a recent wind storm? Well, I come back this day to find the female tiger basically *embedded* in the pine needles about a foot in front of the rock. I could not remove the figurine without disturbing the needles basically woven around her. The male tiger had also moved, but appeared to just topple over from his standing position on the rock. Something is definitely happening in Chesterton that one could call paranormal. This is a direct comment on male and female energies. The female tiger here was selected as the carrier of the paranormal message. “Where I am could not happen without intelligent intervention,” she seems to relay. The male tiger toppling over could be an accident — this embedding, as I said, falls into another category.

I’m writing the text several days after taking these photos and I know a similar, paranormal event will happen to the below pictured rock very soon. This is Pocket Rock, formerly located in Whitehead Crossing and which I removed from same this past winter, for reasons I outline in a post at the time. In short, Pocket Rock was deemed an “alien” import into Whitehead Crossing and removed. The same is accepted into Chesterton as a welcome guest, since all of Bigfoot was designed as a nest for toy/junk happenings. It is home?

Further south on Second Road below Chesterton, a good number of fallen pine trees appear in a row. What felled them? Another storm? 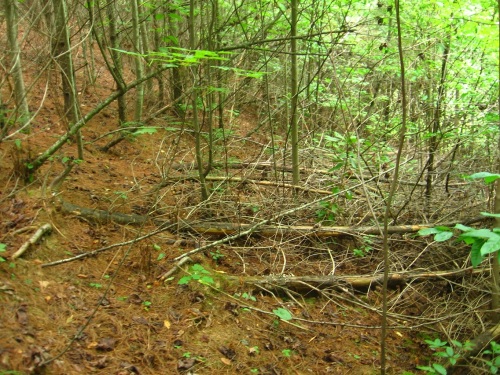 I arrived in Bigfoot Proper through First Road to find that a cracked, brown nerf ball was gone. I subsequently found it in a weedy area of Bigfeet Swamp, about 20-25 feet away. Granted, the ball is not very heavy, but is this more evidence of “poltergeist” activity in the area? I certainly can’t rule it out. The nerf ball became exposed to the elements after I removed the pressure canner top formerly covering it and took the it to Chesterton. All this seems to make some kind of fantastical story, or the unfolding of such. 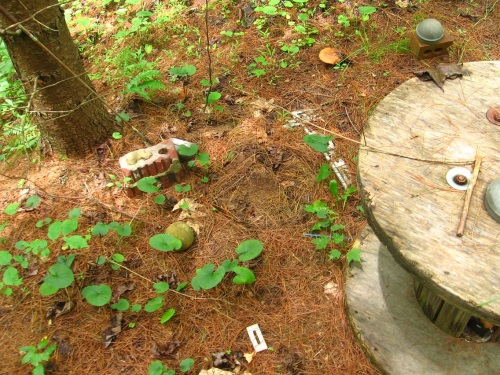 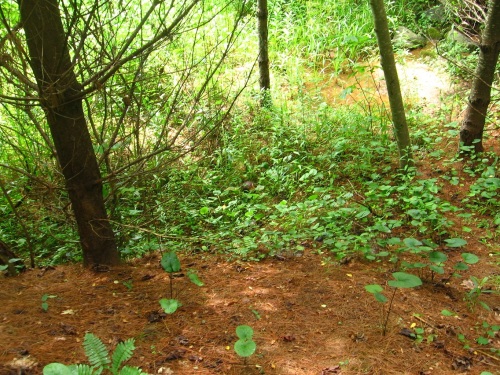 Edible blackberries are appearing in the Bigfoot area. Yummy! 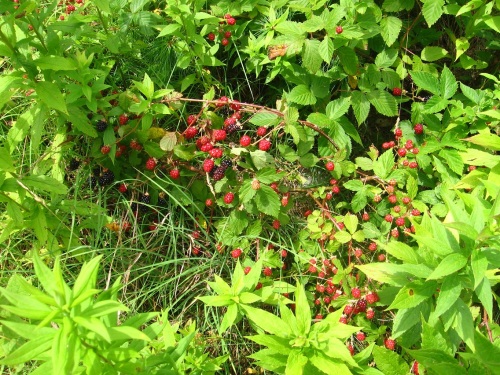 Doors are open once more at the old press box of the football field, like when I took these pictures last fall. Who opened them? Anything different inside? I’ll have to check soon, at a time when skateboarders aren’t around to take note of me.

Purple flowers and yellow pipe at the Plateau.