Baker Bloch walks back into his Collagesity from the front gate of Old Mabel’s Clarity home (new name!) and pauses to admire its complex collage of structures.

Ballerina returned to her rightful place beside Boos, check.

A new being in town. “Welcome stranger.” No answer.

Marv Taylorson never opened that garage of his here, thought Baker Bloch while passing. But Allen Martin’s got a much better setup over in Collagesity North now. He reminds himself that he’ll have to pick up the Spookmobile tomorrow. 5000 lindens for repairs! Well, that blows most of the money Baker Blinker made on the recent land sale over there, pheh.

Into the private Blue Feather he goes to catch up with the town’s core constituents, meaning Baker Blinker, Hucka Doobie, and himself essentially. And also share news about Wheeler and Karoz Blogger over there on New Island. Karoz is returning for real this time! But alas — no, he shouldn’t think that. But Wheeler is coming back as well. The “Bill”, ugh. 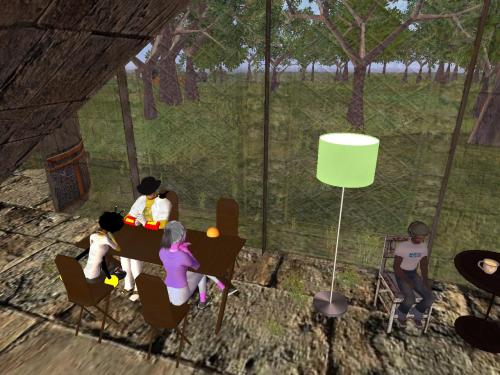 “Thanks for sitting down here for a change,” said Baker after they had arranged themselves around a table on the bottom floor of the Blue Feather. “I’ll take one of the seats looking away from the forest since you two were so agreeable. But isn’t it beautiful?” He glances at the forest over his shoulder before unrendering the trees and grass to decrease lag. “I missed it, even in the short time I was away.”

“So explain, Baker Bloch,” opens Hucka Doobie. “You said you had something to tell us about Old Mabel.”

“First off,” says the male Baker, “we need to discuss a little bit about *time*. Remember the last Table meeting?”

“Sure,” states Hucka Doobie. “You were there.”

“No, I really wasn’t. That was Wilson. Old Mabel picked up on it. But here’s the thing — it doesn’t matter any longer who is who with what avatar. Not overall. I’ll show you.” 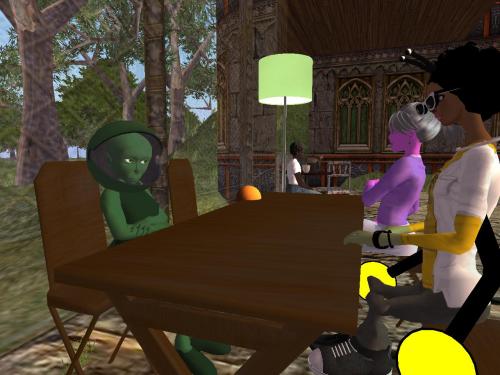 “How?” is all Hucka Doobie could manage with dropped jaw.

“Well… Baker Blinker, check your outfits. You can do it too now. You see, our user had to first give me the power to also become Old Mabel because I had all the stuff. In any one *scene*, let’s say, it’s easier if one of the characters is me. Even if it isn’t me per se. So sometimes when I play Old Mabel, and I’ve been doing it frequently lately, then Wheeler becomes not *Wilson* but Baker Bloch — sometimes — to back me up. Of course Wheeler could also have the power to become Old Mabel. But we don’t like doing that to her.”

“Why not?” asks Hucka Doobie. She checked his outfits as well — no Old Mabel so far. Just her present form and the old bee outfit, her original Second Lyfe avatar.

“I can answer that question,” Hucka,” speaks up Baker Blinker. “It’s because Wheeler is different from everyone else here in town. I *use* to be her. We’re — what would you call it Baker Bloch? Complex.”

“It’s a definition we need to start thinking about, yes,” agrees Baker Bloch. “We’ve *all* changed a little. I’ve dropped the (Space Ghost) mask. Hucka Doobie, you’ve moved away from your Bee purity. But nothing like Baker Blinker has been through. And now: Wheeler. So we don’t like to tinker with what Wheeler is. That’s why she’s The Bill. That’s why she technically still runs the town. Baker Blinker knows all about this.”

“My time in the complex world is over. I’ve returned to basics, the simple. I’ve returned to what you guys are. I’ve had my walk on the dark side. I’ve stared through eyes of darkness. I passed that onto Wheeler, however, and I’m glad of it. I feel free.”

“You see, Hucka Doobie,” Baker Bloch says. “Baker Blinker needed to talk about this. Go ahead, Other Baker. You have the power now. Change into Old Mabel as well. The world won’t end because there’ll be two of her. Go ahead and show Hucka Doobie our user power.”

Baker Blinker decided on a different tactic, just to fool around with Baker Bloch.

“Oh right,” he says. “I forgot about 3d Karl. You’ve been through this. And that was during the days of your dark passage. Very brave of you. Very brave indeed.”

“Let’s see if I can smile,” Baker Blinker says. She tries and fails. “Nope. It’s an old avatar, no longer available on the Second Lyfe marketplace. And the avatar is non-transferrable. So I’m essentially — most likely — the last Karl of my kind.”

“I had no idea about all this,” proclaims Hucka Doobie. “No idea atall. You’ll have to make a diagram to help me understand. You see, I’m still just a simple bee underneath at all. And I’m not inworld much. But I *do* remember one time I was here.” Hucka Doobie’s eyes slant knowingly behind her sunglasses. “See, I understand stuff you guys don’t. Baker Bloch, if you would insert a photo in your blog later on and I’ll tell the story now. The story of how I became One Pink.