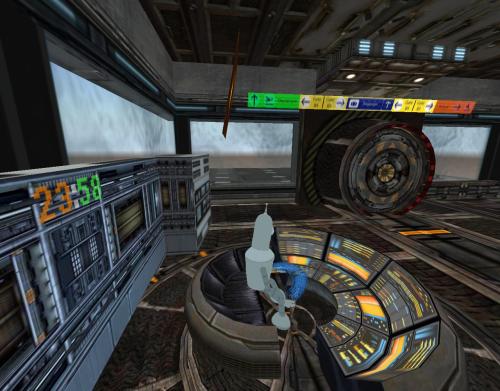 I’ve been sitting at this crazy console looking toward the entry teleporter for about 15 hours now, Bendy thought to himself. *No one* has shown up. I hope Fisher is enjoying his crazy dreamy time. Is this a deserted ship? Like a desert isle? he then thought. Dead Greys? (Hector, Lewis, Gerry) Did they represent the *entire* crew?

But of course there’s Fisher’s dreams of Dr. Ice Cream and being revived here. We *had* to come here to this new New Island in some way, Fisher told him, which was a logical deduction. Red and green together making a whole. Or perhaps a hole.

Spocari entered. Bendy had missed him teleporting up while daydreaming.

The space captain spotted the robot and drew his weapons. “Identify yourself, stranger. It is not logical that you sit there in Willard’s place. Where is Willard? Identify yourself.” 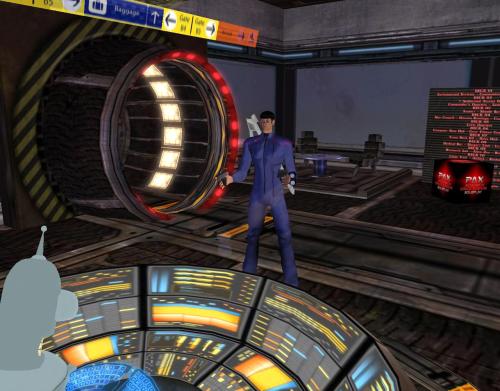 “Um, Willard had the, er, day off. Yeah. He’s sick as well. And he fell… down some stairs. He’s in pretty bad shape.”

“Lies!” Spocari declared in his deep, level voice. “Dratted robot lies. That’s why you should all be on the surface and not up here… lying all the time. Down there in the muck and grime is fine. Bar Lemon,” he then stated. “Did you come up from Bar Lemon?”

Bendy dropped the pretense which he wasn’t good at anyway. “Er, no. From the mound. With the Greys. Dead.”

“Hector, Lewis and Gerry?” Spocari offered. “Fine alien men all. They will be missed. And of course I can survive as well on the surface like you lot. But no other biological agents aboard. Just I. Do you know why robot? How smart and wise are you? Are you like Walldo and just a photo droid? Or, well I can’t say her name out loud because of orders.”

Tronesisia! Bendy thought to himself. She *is* alive! “No,” he then answered Spocari. “I do not know why you can survive on the surface and not other biological agents on this ship.”

“I’ll give you a hint.” He readjusted his phaser and then cut the palm of his left hand with a tiny beam to reveal blood. Green all right.