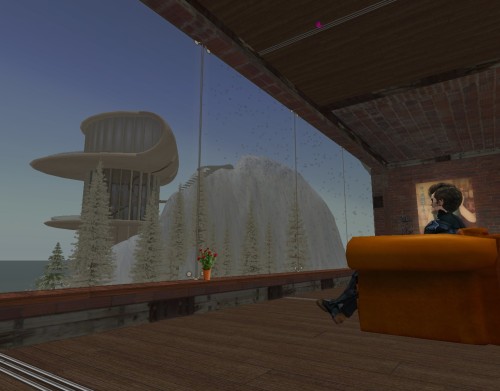 Dr. Nightwing had traversed the whole of Okemo Gorge many times now. But the so-called Murderkiller hadn’t struck again in several weeks, November 27th to be exact. He was sure the perpetrator would employ the deepest and longest canyon in Snowlands for body dumpings sometime, perhaps as part of a climactic spree of some kind. But how to police it all? Luckily there was the ONSR (Okemo, Nakiska, and Southern Railway) running through its center.

12 stops existed along the railroad, almost the same number of murders already perpetrated by the Murderkiller in Snowlands (13). He understands 12 shouldn’t be forced into 13 so easily, but can’t help himself. And certainly the 13th and last is being highlighted through various, recently exposed details. On *this side* that would be Schism Santa, torn limb from limb by the rogue yeti on a lake isle in Schism and then deposited in the gorge running from the lake to the Southern Sea. How many body parts were found? He recalls 7 — he’ll keep that in mind. But his ruminations keep coming back to that island for a particular reason.

And he must always hold in mind that the killer yeti is in all likelihood merely an outward disguise for something far more villainous and conniving. He knows this through Audrey; he’s learn to trust her intuition. “This is *not* a yeti rampage,” is one of her recent mantras on the subject. “Yetis do not kill 13 beloved Christmas figures over here, then go over there and murder the same amount. This is the work of a mastermind.” In fact, it was Audrey who coined the name Murderkiller. 13 killed over here, you see, then 13 murdered over there. She lists all the names out in that direction: 12 young women on The Cross, with the 11th and 12th begin Ruby and Indigo (as previously illuminated). But the 13th? Also a man in that case, she’s determined from all the evidence. One Duncan Avocado, an escaped slave from the southern part of the Omega continent — Dixie it is slangly called by some, after a similar splinter nation off the old United States of America that was dissolved in the 2030s, he believed; 2036 comes to mind (the United States, not Dixie). But then the topper: Audrey also uncovered a lake island in connection with *his* death. 13th mirrors 13th in that respect. What could it mean? They’ve had long conversions on the subject the last several evenings, sandwiched around their most popular of nighttime activities. His back remains a little sore today.

He can’t follow all the Omega continent leads and patrol the Okemo Canyon at the same time — his *own* hunch for the location of 12 or 13 *more* killings to come. He realizes he must have a confederate — a *companion*. Audrey is a logical choice, what with her brilliance of mind. But there’s also the muted Mystic Girl to consider. Hmmm. Maybe both? he then realizes. He can have more than one companion at a time. Nothing in the Cosmic Rulebook he plays by states otherwise; he’s checked the related sections many times now. But here’s the problem: these would be his 12th and 13th companions overall, if so. He dare not put a lady in the target of a ruthless killer by slapping a number 13 on her back side. However, he also most definitely needs a 12th. So — bottom line (he decides) — he needs to choose. This would be his right hand person to his left hand working over here.

“I just want to pause here again,” says Indigo to the quickly scribbling Ruby on her right. “So that’s 13 *killings* in… Snowlands. Then 13 *murders* on the Omega continent and its cross.”

“*The* Cross,” chips in Ragdoll across from her.

“Yes. And then 12 or 13 more in the Okemo Canyon? Is this what Dr. Nightwing has projected? Or maybe sees in the future?”

Ruby gnaws on the eraser of the pencil while thinking. “No,” she decides. “We don’t have time to open another can of worms like that in the current journal.” She begins to erase the related line. “Let’s… leave it that Dr. Nightwing is puzzling over the similarities of the 13th killings in each direction while patrolling the Okemo Canyon.” She wipes away the eraser shards. “We don’t have to go into detail about what he’s doing there.”

“We don’t?” queries young Ragdoll, eyes alert with surprise, then relaxed. “I do like the idea of the Murderkiller. And the Killen Ponds.”

“Killen Ponds?” exclaim Ruby and Indigo as one. Where did *that* come from?