“Mary!” Wait till I tell Baker Bloch about *this*. Long lost Mary!

“Another investment of yours, Grass?”

“Oh this is just the base, the Linden beginning. Lindenning. At the top’s where it’s at. 13 and 14. Connected now, like they’ve always been in hypertime. And hyperspace.”

“You *do* remember I use to live here. Mystenopolis.”

“Of course. And you’ve found the great faun statue intact and have decided to resume living here and move away from the messy woods. I know.”

“I haven’t given up on Whitehead Crossing.”

“Maybe we should start with stuff you *don’t* know, then.”

“One more thing, Grass. Before you commit to this. I can die. Unlike any of the other core avatars. It just happened to me. On Highway 13. Or maybe it was 14.” 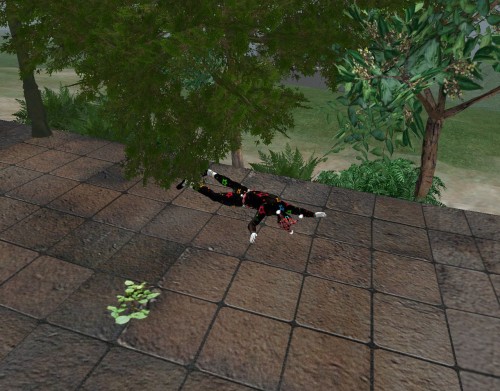 “That’s okay,” assured the giant, green toy to his destroyer friend. “I actually know all about death and resurrection. We Mmmmmm’s have quite the short life span. I’ve died several times while existing in Our Second Lyfe.” He edges closer to Spongeberg. “Listen, that’s what’s so fascinating about the appearance of Gene Fade here. He swore he’d never return, since you age about 7x faster in this place. Now he didn’t die while here, because Mossmen like him naturally live so long anyways. *Anyways*, we’re opposites, see. Opposite sides of a spectrum.”

Spongeberg keeps looking. “Any liquor around this joint?”

“Here’s your rainbow daiquiri, sir,” announced Male Goth Avatar, currently serving as bartender at the End of the Line Inn.

“Great, thanks. Anything for you, Grass?”

“No, I’ll just keep staring at this wall while you imbibe. You take your time, though. We have plenty of time here. Plenty.”