As of this afternoon, Collagesity is no more. A new town has sprouted up on the Nautilus continent to take its place. Name: 7 Stones. The transference is complete; Minoa properties are all up for sale. There’s a 5120 and 4096 next to the Rubi Woods, in case anyone is interested. Asking price: 2.3 linden dollars per square meter. Also there’s a 1024 over there owned by Wheeler going for L$1.7 per sq. meter.

Shocked I could move a town so fast? So am I. But almost *everything* was transferred, with a few exceptions. The SoSo Mall didn’t make it. Nor did Pitch’s Darkly Manor. But about everything else was successfully shifted from Minoa to Fordham (my new home sim) in well under 3 days.

7 Stones Phase 1 is complete. The town has been established. I’m now on Phase 2, which will include stabilizing and then reopening the Fal Mouth Moon and SoSo galleries formerly present in Collagesity, and just rounding out the place in general as the dust continues to settle.

Why the name change? one may ask, especially since the current plan is to display about the same amount of collages in the town. Well… just decided it was time. And the name 7 Stones actually has a history in this general vicinity. Too long a story to go in tonight. I have plenty of time to delve into town history, because I’m certainly here for a while, probably years.

For the record, this is the 5th appellation change for a virtual village of my creation, starting with Pietmond in 2010. But the name Collagesity has lasted the longest by far, existing from June 2014 until this month. 5 year anniversary would have been in a month and a half (!). Sad… but the new town is working out so well. Everything is slotting in really nicely. 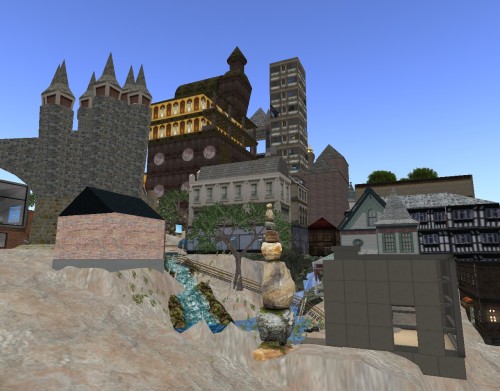