Somewhat later, a tall, blue-ish gnome approached the side of the sunken pool from around one of the two giant cylinder rocks there, telling respectively swimming and sunbathing Woody and Wheeler he dug it. His name: Salazar, according to the object’s description. Beside him, a shorter, similarly red capped gnome protested Linden tier gauging, a subject reviewed in a post earlier this month by Baker Bloch to “newbie” Grassy Noll. I don’t know what the policeman has to do with any of this. Maybe he’s policing the protester? 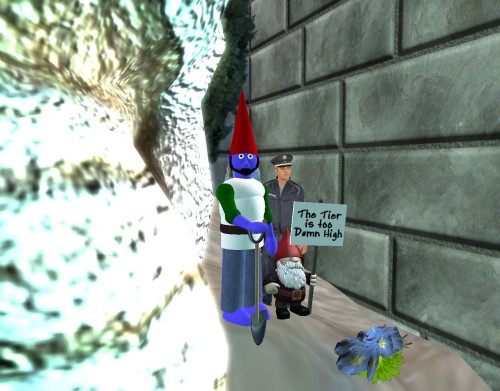 Who lives in the nearby lemony VWX dust bunny fairy house remains a mystery. I don’t think it’s Salazar nor the other gnome, nor the policeman. Someone else.

Wait. I’m picking up something. A person named Jack lives there. Pretty sure of that.

So many Jacks, though, to choose from.