When Tillie was feeling a little gaseous (which was fairly often), she’d sometimes go down to this bench by the water’s edge so as not to bother Tealy, who was always hard at work around the cottage doing house chores, gardening, and not what. Tillie was lazier by nature, a dreamer. She’d see things in the Rubisea water. Nymphs sometimes. Fish — but that was just because there were fish in the lake. Then a sea monster one time, but she was on some weird kind of dope. She said it was for her stomach, but really it fell under recreational usage. She’d taken the same stuff 4 times now, and decided to stop when the water and the accompanying feeder stream (now just a waterfall, where in past times it was a full stream) turned blood red. Tasted like blood too after she dared to dab a tiny bit on her tongue. Rubisea — the name comes from ruby, like the ruby color of blood. Nasty Branch was the name of the feeder stream. She’d merely revealed the past behind the present through the drug. But no more.

She was feeling better now. She would return to the house and help Tealy with whatever he was doing at the moment. They were a team, but sometimes Tillie had to do her own thing for a while, drugs included. Tealy had never taken drugs, but he drank like a drunken sailor. So they each had their vices. Oh, and Tealy flew airplanes. He was an ace of the First World-Wide Web War (WWWWI).

“Hand me that (hand) spade please, Tillie,” a drunken Tealy requested to his partner after she reentered their home. “I have a feeling that diamond is there for the taking today.” Oh, and he was a prospector of sorts. Or at least for one particular mineral, a gem he’d personally named Jim. “Gotta go dig for Jim,” he might say randomly during any period of intoxication. “Jim’s beckoning me today; I can feel it in my heart.” He even started a Jim Club composed only of himself, but, formerly, Tillie. For she admitted — probably when she was on some kind of dope, because she would never be so insensitive straight — that Jim was imaginary, and represented his own, lost soul. Member no more.

Drinking beer and digging for Jim out behind the garden.

They both wanted a role, and they were a natural pair. Reintroducing to the reader or readers: Tealy and Tillie. Combined: TILY. 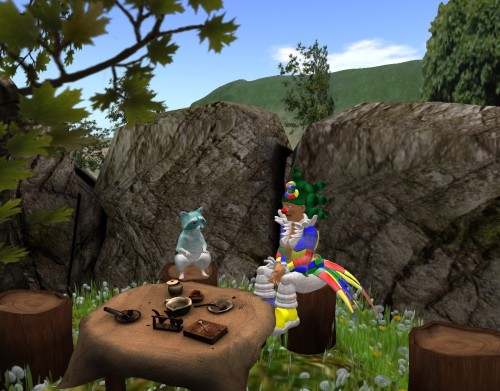 “It always is Tealy.”