Buster was checking the About Land options. “And although we can rebuild — kind of — we can’t run scripts here. We’ll have to look elsewhere. Good thing I’m scouting out the total area, huh?” Buster puts hands on hips, defiant.

Bettie wasn’t going to respond to this. Suckaluck’s house should be here (!). Stupid, mutable Our Second Life. But the hills are permanent, she then thinks to reassure herself. Not going anywhere as long as the whole continent is around.

We’ll stay here at the peak tonight, Buster ruminates. Perhaps make love to rejuvenate ourselves but perhaps not. Increase our draw distances to the max. Enjoy the view over the Shallows this way… 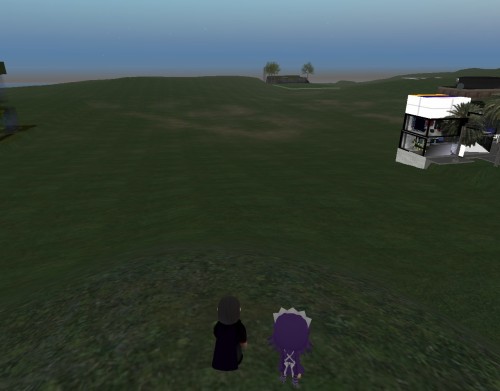 … and the (rest of the) hills the other way. Those super interesting hills.

“I thought you said I didn’t have a reflection, Bettie, and that I’m not real in this world.”

Bettie looks over. “It’s some kind of trick,” she replied after studying the situation while not moving from her own position. She’d been turning a lamp on and off while standing just outside its lighted circle. “You must have touched something and triggered it.”

“Rowan is a strange sim,” Buster replied back to his fellow tiny wife. “There’s a man named Bean in the Real World who is also a Rowan — Atkinson I believe. A flattie version of him exists in Collagesity, um, *7 Stones*. Runs the library there. I should check out the 7 Stones library soon. See if anything is different from the Collagesity one.”

“You know we don’t have time for that. Between schooling and scouting there’s no room!”

“Let’s go (speaking of time). There’s a limit to how long prims will stay rezzed here anyway. This can’t be a base for studying the hills.”

“You already know where the base is,” Bettie replied. “Professor Suckaluck set it up all those years ago.”

“I know I know. I’m just scouting around the area to make sure. We *are* scouts these days.”

“For about 2 days more, yes. Then it’s return to Long Drive and create reports and then get back to studying studying studying. End of the 1st summer semester fast approaching. Soon June will slide into Juli and we’ll be eating hot dogs and groatcakes down at the 4th of Juli celebrations over in X-Town.”

Ever wonder what the X stood for? he wanted to reply, but realized they had no more time for dialog here. 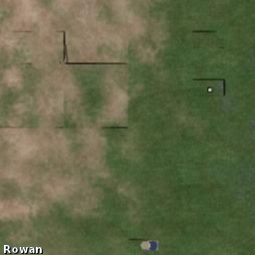