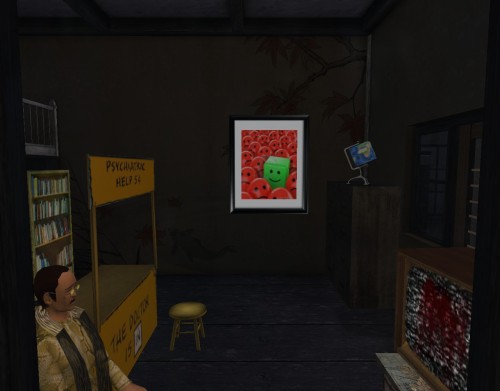 The next night, Golden Jim returns to Baumbeer’s not to investigate the decontaminated crime scene any more but to just sit in the old wooden chair downstairs and stare at tv static, part of the doctor’s therapy for most ailments of the mind. What was he looking for? he pondered as shapes began to form then quickly vanished in the snowy noise. Lu Ellen Hutchinson? Gone, they discovered, leaving her inept frog cousins behind who didn’t know anything. Gill Alex and Blue Berry Girl: also exited, back to MISTY MO we assume. We’re still checking on that whole connection. Another ghost manifests and dissolves, teasing him once more. He senses it is time to return to Gaston, to go back to breaking up prostitution rings and busting drug addicts, more in his line of expertise, ha ha (being a former male prostitute and drug addict himself). Murder’s over his head. He’s grasping to stay above water. The static, the noise threatens to pull him down into the abyss again. One more shape forms and disappears. It’s time to go home.

Meanwhile, on the other side of town, the Far *West* as the East likes to call it, Senor Green Jeans shows up at the Neptune Pool on a mission.

“I’m looking for a rabbit,” he spoke in booming voice, looking down at the the 2 people there taking in the morning sunshine. “Small. Wears glasses.”

Alice Farrowheart and Toddles both gawked at him.

“Maybe hangs out with a kangaroo. Perhaps a moose?”

He throws up his huge, hulking arms.  “Anything??” 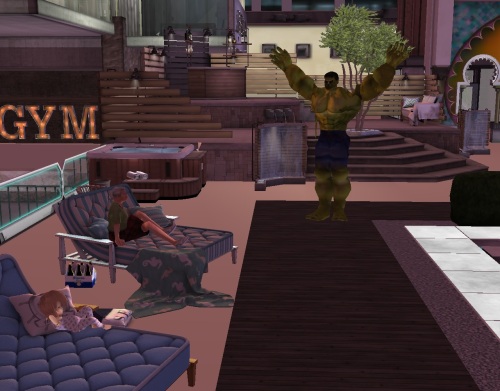 Alice later wrote the whole thing down in her new-ish “Little Book of Synchronicities”, complete with sketches.