“I grew up here — in this room. These were my cats. All named Philip.” 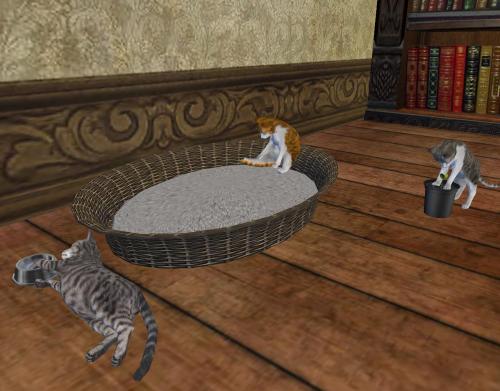 “So they were all the same cat,” I responded after thinking about it.

“I suppose.” The matter was then left up in the air, as were a lot of things here at the Southwest Castle. Soon we will visit the Northeast Castle down in the bay to flesh out the picture of this mysterious Hilling sim, so near to the Spinterwood summit but acting under different energies still. Those that oppose the force of ground apparently.

Then she decided to answer more completely. “Philip is striped and grey. Philip likes to play with his tail. Philip sometimes disrupts plants.” She pointed to each cat independently. I knew that this animal, whether 3 separate cats or just an amalgamation of one cat, was long dead. Katy was all grown up now and writing novels for a living. And married to Jack Toadswallow, living happily ever after like a true princess should. We are only revisiting the past here.

“And you also had dragons, I understand.”

“She points her index finger up, making a point. “Common misconception. We had *eggs*. 3 of ’em. But the eggs did not become dragons.”

“What then?” I was taken quite aback at this unexpected twist. She stared at the cats again.