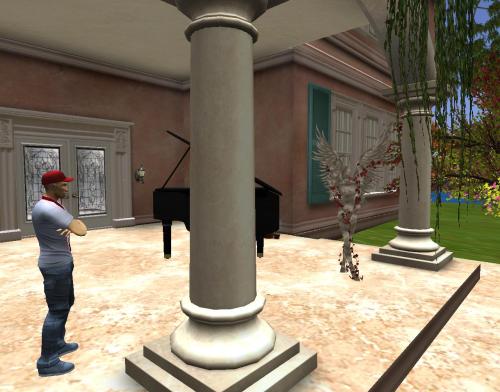 He crosses his arms, feeling guilty again. Was this statue that had trouble rezzing in before *alive*? Was it another version of himself? Was it Graham once more? The green dot doesn’t lie but no one was around according to his scanner. He pinches himself. Is he dreaming? His hand passes through his arm on the way to its intended action. Failure, of course. He’s dreaming.

He attempts communication. “Whatup?” he decided to frame it. “How’s it hanging?” he follows up. Nothing. There *must* be something to this — anomaly.

The only avatar around — found through turning off volume and toggling on the “show skeleton” option for avatars — is this dancing gecko more in the southern part of the sim: Montague. He teleports to the edge of a sky “o” to find it. He stares over at the drink cooler after manifesting, realizing this was another hole, like in his most recent work called “Half and Hole” featured in that last post before the current one here. And the bar itself is shaped like a hole. He’s traveling a diagonal again.

“Whatup?” he tries again over to the jiggling exotic lizard. He’s sitting on a “333 — Tiki Bar Stool”; he checks while waiting.  But nothing again. He wasn’t surprised.

Someone else must be coming.

It seemed like a good place to send Crappy in, the newest freebie outfit on the marketplace I added to my cart only several minutes back. Crappy hates the 1974 music of Supertramp and thinks their album “Crime of the Century” is vastly overrated. Perfect. 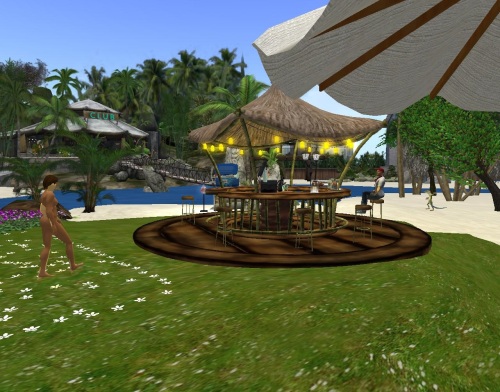 It didn’t work! Something is wrong with Crappy. Maybe Supertramp merits deeper study after all.