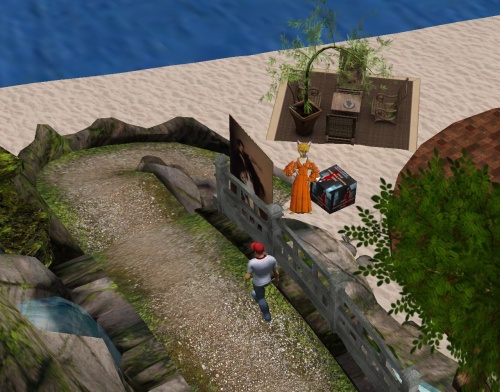 He met her in the club beside baker b.’s Red Umbrella gallery and in front of Norm the Cashier’s flower shop. In his dream he followed her down to a beach at the enigmatically named Publius sim. She was wearing a red dress, a freebie in a box as Graham 02 or Barry 02 soon discovered at the end of the path. Later the red (box) was removed at a club in Montague owned by a big fan of Supertramp. Red strip: now he knew what that meant. He can imagine Norm shaking her head. He better get back to her. If only he could figure out a way to wake up — pinching doesn’t work here.

She was shaped like the letter Q, a hole with a squiggle on the edge,” he grasps for an explanation after finally coming back. “That’s me!” Norm doesn’t approve and threatens to cut off his credit. “Do you know how much I sacrificed to get to this place?!”