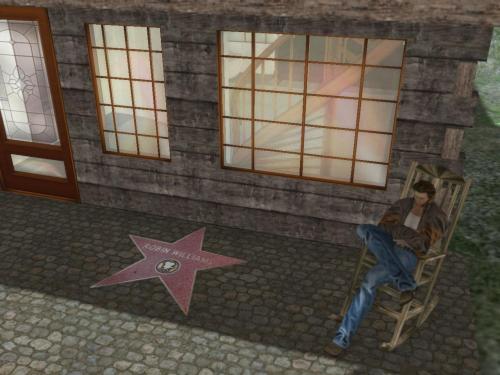 I occasionally stop by here, a house to the south of Chilbo on the Jeogeot continent, to check and see if my star is still there on the porch where I put it, oh, say about a year ago by this point. Owner of the house and attached property is a bigfoot researcher, like myself. 🙂 Guy named Snow. And the creator of the star is also a Snow — small world, or so they say. The first Snow is also co-owner of Roberts and Franklin Investigators in Towerboro on the same continent. 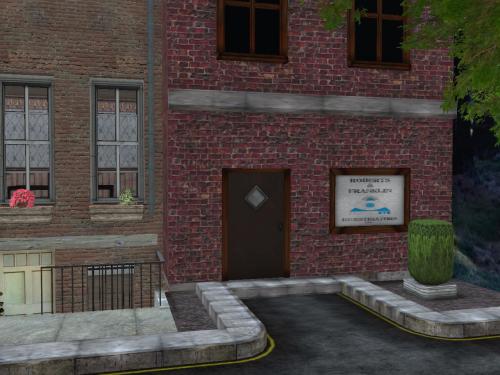 Has Robin Williams pic and quote in his profile, thus the decision to place the star here. Williams was a big fan of Firesign Theatre. And a couple of years back, in the sim of Moork, I found a small parcel owned by Uh Clem, a name derived from one on their “Bozos” album already mentioned in this photo-novel by Peter Ladd, nephew of Mr. Babyface. Tonight I found an Ahclem avatar in the same group as the person who owns the Ouroboros property seen in the last part of my last post here (and who has a Firesign Theatre quote in his profile). And, to remind, Shelley Struthers, an all important character now, extraordinarily so, is based on a Shelly I found in Our Second Lyfe who is also a big fan of Firesign Theatre (another one of their quotes in her profile; is, like myself, a member of the only Our Second Lyfe Firesign Theatre group I know of) and whose apartment she has owned for at least several years lies directly on the triple number of Hooktip, on the Head Line of the Heterocera continent. Keep in mind that we just found more oddities on the Heart Line, its matching diagonal from that particular continent. You can get a glimpse of what I’m working with, all the connections. It is, indeed, a Matrix.

But I believe I know what’s on top of the box now. And the bottom. Nautilus, my *home* continent now (not Jeogeot, not Heterocera) is at the bottom. Top is Reality: an approximately 10×10 mile square in the middle of Ringgold County in the south of Iowa. And then they begin to interpenetrate.