Blogging at Sunklands Institute while the Moon comes up.

Perch: the restaurant is still intact. 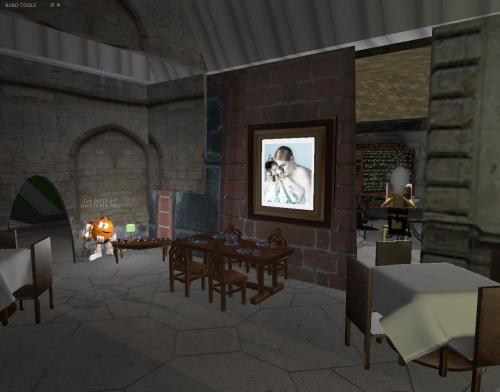 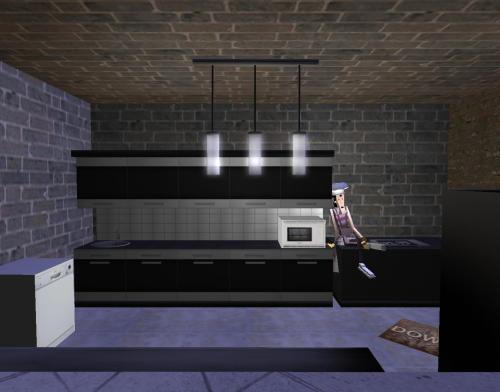 Magika Bean waits for her date. 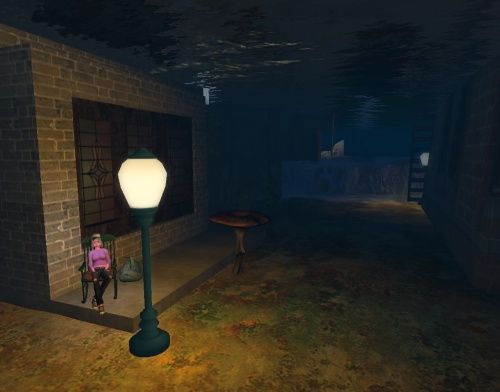 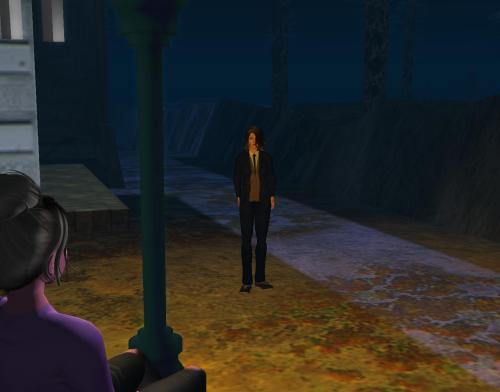 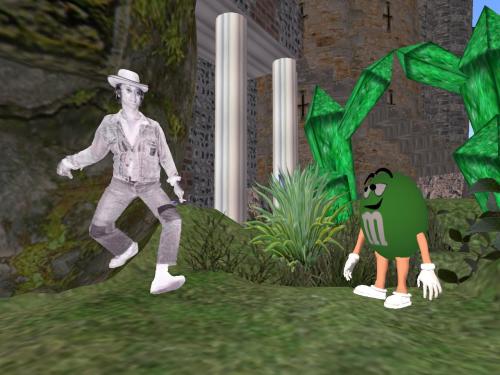 “You here for the Table interview as well?” Mmmmmm Salad Bar Jack asked, fresh from the new portal Wheeler installed just yesterday in Carrcassonnee’s *former* gazebo. John Lemon utters complete gibberish back to Mmmmm, but he understands and interprets.

“I see. First to interview. Luckey you.”

“Well, it will be a pleasure to serve with you sir on The Table. If I’m chosen. I don’t have much hope, actually. I worked with Baker Bloch over in Jonesborough.”

“No, not Heterocera. The Real World. TILE Creek. Ever heard of it?”

Gibberish. Salad Bar interprets that John Lemon doesn’t know where this is. Lemon asks (again only Salad Bar can hear this, if anyone was listening in — like us) if he was in a carrcass either positive or negative.

After Lemon’s next round of static, Salad Bar proclaims: “Instant disqualification, eh. Well, maybe it’s best I don’t show up for the interview. This Wheeler lady may have misinterpreted my resume. I play in *my* movies. Action adventure ones in the main, although we’ve branched out a bit lately, Gene and I. Don’t suppose you’ve ever hear of actor/director Gene Fade either, my close associate and colleague?”

Lemon goes on a bit now with his incoherent talk, explaining something important to Salad Bar.

“Child, eh?” he replies after a pause. Lemon shakes his head again and corrects Salad Bar Jack. “Chilbo? Then we *do* know each other!”

15 minutes later he also receives a chair at The Table. Wheeler remembers him as well. Curled Paper puts a check mark beside his name. On his way out he talks again to fellow Mmmmmm King Bill. “See you later you complete bastard, hehe.” But Bill is still worried about time and getting back to The Hill.

It seems it is too late. Bill Hill is no more. 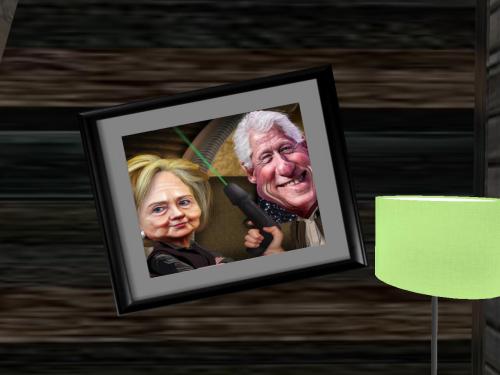 Already, many changes have been made to Collagesity in the past several days due to the mainland prim increases mentioned before LINK. The Edwardston Station Gallery with the complete 10×10 has been moved to Rubi (!). Yes, for now it’s still in Cayuga, but I have the feeling this will soon become the official version, easily spotted in the sky from the western side of town.

More changes just below the ESG: a duplicate of Gloomy Gus has shown up, along with another airstream trailer to also match the one in Collagesity. Wonder who if anyone lives in these places — or will live there? So more story possibilities opened in that direction (west).

Let me get to a new restaurant and new gallery now. As mentioned just earlier, a connector structure now links the Blue Feather building with the Town Diner. I don’t have a name for it, but the thing may *predate* either of the latter(?).

Standing in the same spot, Baker turns around to marvel at the addition. Collagesity may have a new nickname because of it, combined with the enlargement of the Blue Feather building: sity of Spires. Spiresity even, perhaps.

There are spires glued onto sides of buildings… 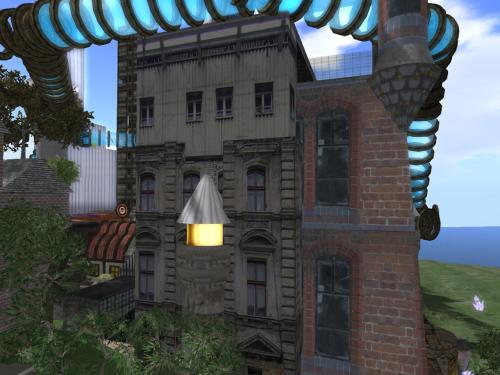 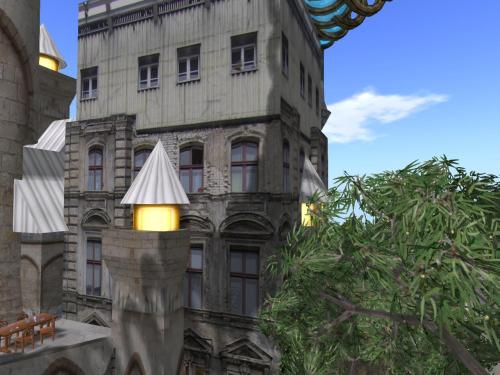 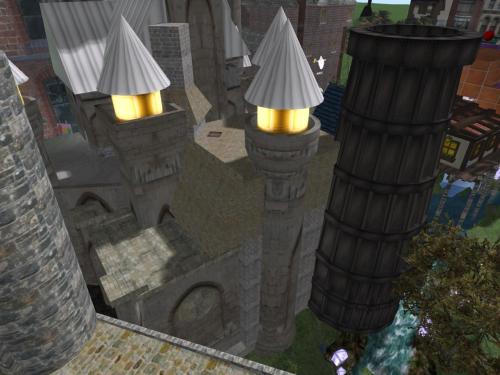 There’s even one where it totally shouldn’t be, some kind of symbolic gesture from the past.

The restaurant now occupying the center of the connector — directly above the Old Cannon Road — is called *Perch*. 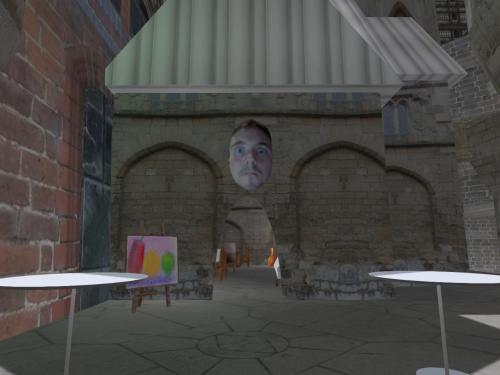 Which *means*… Carrcassonnee has been removed from her eye. We’ll return to that super important development in a just a little bit.

Baker’s going to have to wait on his food for a while, because Perch hasn’t officially opened yet. Wheeler is the owner — Wheeler, in fact, totally owns the whole town now. Carrcassonnee has been deposed.

I’m not sure why Mmmmmm toy avatar King Bill got associated with the fledgling restaurant, but there he is… 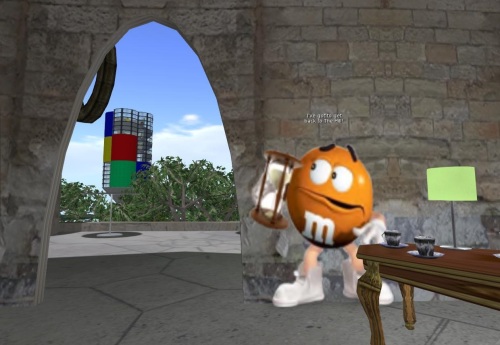 Actually I do think I have a story about that, related to Wheeler’s recent declaration that she is now Bill or maybe The Bill.