Prism Cave refracted Herman Park back into Frank Park. And visa versa. It is True Man, a combination of Franklin Delano Roosevelt’s dime and Eisenhower’s dollar. It is also 10 as 1, then. But Truman is between the two. That’s the meaning — it’s a portal. Marked with poison ivy, true, but not necessarily an evil or bad place. Just a loss of identity if you’re identified with either park, as some are. Herman is Herman and True Man is beyond. It’s Frank but more. It’s “outside”. It’s another Trek.

Thanks for that. Cpt. James T. Kirk was born 2233, which means he was born in Tinsity. Resolution.

There are 2 “3rd lion roars” in Messiaen Trek, Hucka D. A 3rd cue is Spock creating his own lion roar apart from Kirk, which leads to almost unrepairable disaster as he mind melds with V-jer. Afterwards he learns friendship trumps search or quest for knowledge. A hard lesson.

The bigger the harder, etc.

Go back to Prism Cave but not soon. Go back to Bee’s Line Ridge soon. Tomorrow. Take measurements. Read “Gold Bug”. Thank you.

Another fantastic day of hiking, with almost perfect weather. Only complaint was that it was just a touch cold when I became more stationary.

Went back to Lion’s Roar and (lower) Byng to begin, took the Mystery Path to upper Byng, trying to think like a person who lived in the woods would — what would I be doing later on when I retired and might have a chance to camp here, for example. Well, I think I’d be gathering stuff in the woods to study back at Lion’s Roar, that’s what I think. Like rocks, obviously. In this way I am thinking like Michael Too, who actually “lived” on this mountain, on the other side — at the Michael Too compound recently revisited. Michael Too similarly collected rocks from the neighborhood and brought them back to his compound. And Lion’s Roar is turning into a kind of compound in and of itself, what with the import of 50 outside “objects” recently (all relocated from another part of Herman Park, however: SEE Rules of Billfork).

The Mystery Path most directly connects upper and lower Byng, allowing me to rather easily bypass the Impasse on this creek (rhododendron clogged stretch above Impasse Tree). The upper part of Byng, where it separates into several source streams, has no such problems — it is basically open woods. Once I get pass the Impasse then I don’t have much problem with rhododendron and similar exploring obstacles after that in continuing to head up and also around the mountain. The rhododendron stays closer to Flannigan’s Fork, and the downhill parts of the 4 Valley region explored the day before.

I also believe the Mystery Path had to be created by Lisa the Vegetarian, supposed — no *real* owner of Wealthy Mountain and whose signature can be found in quartz rocks; white quartz rocks. A good number of such rocks are found up and down Mystery Path, so that’s why I believe she created it, in some form or fashion. Michael Too also probably “knew” Lisa V., and perhaps strengthened her presence on the mountain. Michael Too may have even known of Byng, although it’s a pretty hidden stream as opposed to, say, Green Oz Creek. Not that easy to reach. So my guess is that Byng remained relatively free of Michael’s influence (although I could be wrong).

Several other places need to be named now, including a flatter part of a ridge just south of Byng. I think I’ll call it Bottle for now, or *The* Bottle. A number of mystery things about The Bottle: there appears to be a Bee Line of a path that extends diagonally all the way across this ridge, a distance of perhaps 30 yards or so (guesstimation). It runs through a perceived center there (Bottle Center), where an actual, broken bottle was found, but only after the Bee Line had been uncovered. The bottle merely heightened or accented the already discovered line, that is. I’ll show pictures of this bottle from Bottle in the next pictorial post here, hopefully. I also found a golden bug, which may also factor into the new weirdness since Poe’s “Gold Bug” story describes such a bug and also has an attached bee’s line or plumb line itself. I’m currently re-reading this famous short story, set in the Charleston SC area (also brought up today as a beach destination for my visiting niece and nephew from Colorado!).

Legend might have it that The Bottle was destroyed in 1933, and Franklin Delano Roosevelt and perhaps Dwight D. Eisenhower visited. Or perhaps DELANOR Roosevelt, half man president half woman 1st lady. Or perhaps they stayed the f— away from this haunted site(!) Near the upper end of the Bee Line is a rock pile that may be a grave of some sort (?) Whose grave, then? Or is it just another pile of rocks in the woods as often found in these parks. Whatever, obviously Man has visited this lonely ridge in the past. I’ll have more to say about the bottle in question soon, as stated.

Next up is The Cave, which also needs a name. It lies a bit around the mountain from The Bottle even, heading clockwise from Byng. It’s certainly another mystery, and I’ll get to a photo taken there soon that seems to show a “spirit”, who chooses to take the form of what looks like a coin, perhaps a dime or commemorative dollar…* 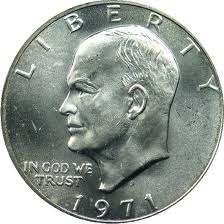 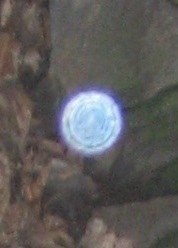 I think I’ll call this cave, then, *Coin* Cave — that’s my coined name for the place, hehe. Poison Ivy grows on its upper side and top, which appears rare in the immediate area. Bad sign? Probably. The cave itself is quite big for a local one, and one of only 2 or 3 that I can think of I’d call a sort of cave proper and not just a rock overhang. The cave is triangular shaped front to back, like a kind of prism. Prism Cave might become an alternate name, then.

It’s probably about 20 feet deep, and wet inside. I didn’t go in — scared (and probably for good reason). Coin Cave or Prism Cave might lie directly uphill from the other, smaller cave I found in the 4 Valley region pictured in this earlier F&HE post. I might now call this Other Cave, then, since it is the smaller of the two and not really inclosed.

* or this commemorative Eisenhower dollar shrunk down to the size of a dime.