“The Ashville Circle was where it was all heading, Hucka D.”

Put up your map and let’s examine.

This is the head, Hucka D. The man, John Lynndon as we’ve come to call him, puts his hand in the middle of the sewer top to indicate the circle. This is point A on the map above, 0.32 miles from the Hart. The radius of the [Ashville Circle] in other words, is 0.32 miles. Cherry Avenue, the spinal diameter of the circle, also tilts from true north at about a 32 degree angle. Worth noting.

Do you think John is a homeless person?

Do you think the hand indicates more than it seems? 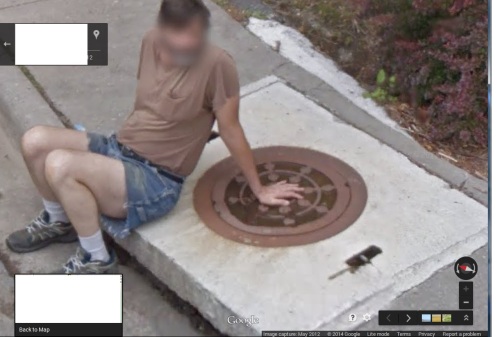 Hucka D. has gone back to bed. In concocting the circle yesterday, I was aided by the fact that several more intersections apart from those involving Cherry Avenue seem to be highlighted, including this one to the west. The intersection appears to be on the outer edge of a neighborhood we’ve dubbed Apricot-Bone. Not sure if that name will stick, however. The east-west road involved here is Banana Street again, famous for the Ingleboort and Flaarph invested house next to Linden Creek. That particular house lies more toward the E, or center, of the A’ville Circle, with Banana Street peeling off (sorry) from Cherry Avenue near there as well.

In visiting the intersection via Google Earth Street View, I was very surprised to find something more unusual going on. The conjunction of Banana Street and the side road we’ll call Cone was calm itself.

But one Street View camera shot down Cone manifests a figure sitting in the middle of the road, which turns out to be a teenager.

The girl appears to see or hear the Google Earth car approaching, and moves out of the way. We get a good look at her…

… and also glimpse the person sitting on the front stairs of a home across the road she is interacting with in some fashion. Wish Hucka D. was still around to possibly tell us more about the story. Ohl well.

“It’s not Cone. It’s *Bone*. Now leave me alone so I can get some shuteye before my big meeting next year!”

So Hucka D. says the side street is named Bone, hence the latter part of the neighborhood appellation Apricot-Bone. Makes sense. Or maybe it’s Pineapple. Better keep that to myself. But then there’s this: Fred Cone from Pine Apple, Alabama, as talked about by comedian Jerry Clower on his 1974 Country Ham album.

“I didn’t play high school football because we didn’t have enough kids to field a team,” he said.

This intersection is near the south end of Cherry Avenue…

… first highlighted here. The two sets of walkers are shoulder to shoulder at this intersection of Cherry and [insert: Apricot] when we enter the former in Street View from the south. 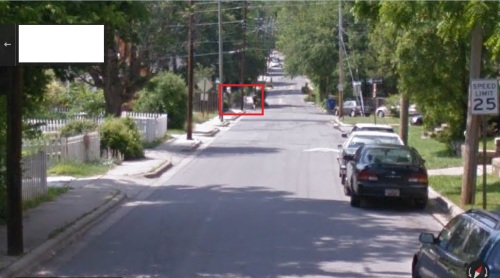 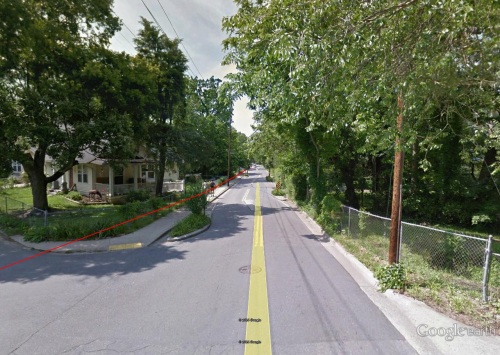 Also helping delineate the Asheville Circle is this intersection to the east, involving the oddly coined Hartichoke and a larger artery named Berry Avenue, running parallel to Cherry appropriately enough.

No, I’ve woken up Hucka D. again in my stupidity and he’s indicated that Hartichoke is actually named Salad. He says not to bother him now until February. So I suppose — have to be careful here — that Salad is named after Salad Bar Jack, the famous Mmmmmm actor. I hear Hucka D.’s little hard feet hitting the floor next to the bed so I suppose I’m wrong again. “What’s that Hucka D.?” I shout toward the bedroom as he roars his disaproval again. Then I hear the window shatter and he’s gone — flown away to a better resting place, I suppose. So with him gone I’m going to leave it that Salad Place was named after Salad Bar Jack.

But anyway… there’s an island present at the meeting of Salad and Berry. Not sure what it means yet, if anything. But it probably does.

Since the traffic island isn’t present in the below Street View snapshot from 2008 and is in the 2012 snapshot above, we can deduce it was created between 2008 and 2012, obviously. 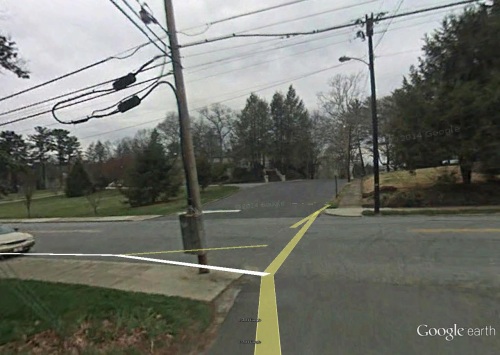 This point marks the Hart or center of our circle, corresponding with the meeting of Salad and Cherry this time. This is no mere Thomas Benton we’re talking about here.

My uneducated guess is that this is Salad Bar Jack’s retirement home in Ashville, bought with hard earned film royalty money. His “place” as it were.

Could be wrong of course.