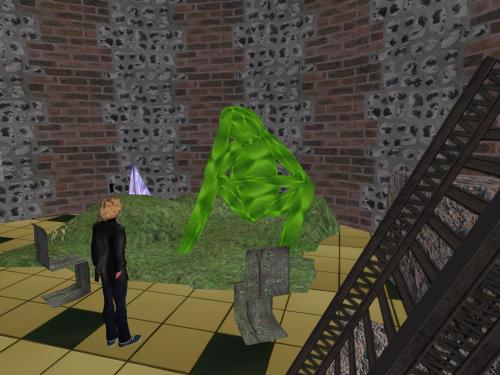 “Sooo. You wanted to see me Carrcassonnee. But you can’t talk without your eye. And Spider is inanimate as well. Hmph. Why am I here, then?”

Spotting it behind a boulder to her right, she used the teleporter again. “And *here*?” 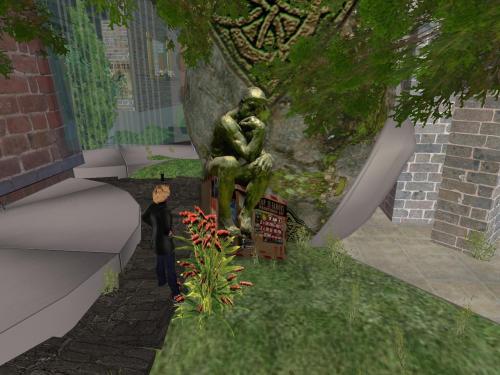 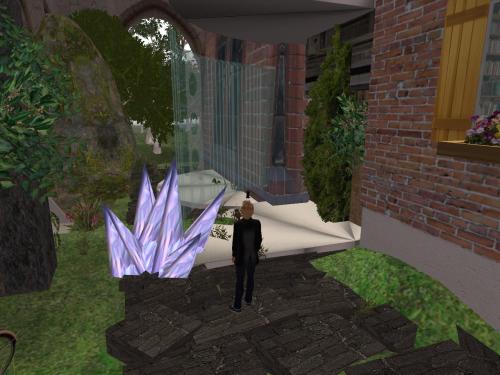 “OMG. SoSo South has been destroyed!”

I, as her user, then realized what had occurred. I’d accidentally linked a teleporter to SoSo South when working on it in the Collagesity skybox the other day. The teleporter happened to be in Carrcassonee’s gazebo when I moved the whole thing back to the ground, which Wheeler Wilson teleported to when trying to reach the skybox from Blue Feather. But in using the teleporter again, everything went haywire, seemingly.

Baker Bloch, posing as Bookworm up in the heart of the SoSo Mall at the time, was called in. He moved all the pieces — which were still linked, thankfully — up to the skybox and went to work. He asked Wheeler to log out to give him room and decrease the likelihood of more wonky things happening. He lowered his graphic options and logged out and back in for the same reason. He searched for and then found the skybox landmark in his inventory. Baker himself headed upward.

In under 10 minutes he had everything about righted. He could check later with a full version of this gallery, which is a Linden build created specifically for the Zindra continent. Baker hadn’t made any significant alterations to the original design. Which was good in this case.

But Wheeler had been spooked. She became convinced that Carrcassonnee did the sabotaging, and was trying to communicate with her from “the beyond”, as she put it. “Something is happening,” she finishes.