“It’s been a while since I — or baker b. — created this one, Hucka Doobie. May be difficult to analyze at this late date.”

“I’ll do the talking now,” requests Hucka Doobie. “First off, this is ‘Pageturner’, created to open the second half of ‘Collagesity 2017 Middle’. You can insert a link there. This collage shows the dominance of ‘Lamb’ in Genesis’ catalog of albums. Peter Gabriel knew it was bigger than all the rest. So did the other members of Genesis who remained after its conception. Everyone knew.”

“‘Lamb’ is part of ‘Tronesis’ now, Hucka Doobie. Is that a good thing to say at this point?”

“Sure. Lamb and Ram die at the same moment at the very center of that audiovisual synchronicity, which dates from, let’s see, 2003. February I believe (Baker nods). That is the opening Tronesisia and Peter SoSo need to work forwards and backwards within the synch respectively. They are responsible for *that* analysis and absorption.”

“‘Pageturner’ represents the creation of a new page in the ‘Collagesity 2017 Middle’ graphic novel. It — the post containing it, opens the 2nd half of the novel. You can insert another link there if you wish. Genesis plays in front of Audrey’s Bar, or on the side, the same — well, it’s just below us now, on the first floor of the market. Peter Gabriel — lead singer — is in some sort of costume, or at least wears some kind of mask. He stands between two representations of ‘lesser’ Genesis albums above him: ‘Foxtrot’, left, and ‘Duke’, right. Both will reappear in the end collage of this series. We should talk of a name. All the characters on the side of Audrey’s Bar represent Genesis albums. ‘Lamb’ looms, as I’ve said. The name above them reads Genesiso. The extra ‘o’ at the end points to ‘So’, Peter Gabriel’s most famous solo album and the one which brought him fame and fortune on par with the rest of Genesis who remained ‘behind’, as it were.”

“You mentioned a name for the series, Hucka Doobie.”

“As you realize, this series is a bit different. It was created organically to follow the story generated within the second half of the ‘Collagesity 2017 Early’ novel. Series before it generated energy on their own, or in tandem with a factual analysis. Not in the case of Bogota. Not (really) since you began composing Collagesity novels starting in November 2015? (Baker nods). Bogota is different.”

“So is this still Bogota?” Baker repeats.

Hucka Doobie puts his round, yellow bee hand to chin. “Let’s get back to that. Returning to ‘Pageturner’, we have Gideon, who is the same as Buster, floating or hovering angelic over The Bible, which probably is another Gideon — Gideon’s Bible, mentioned in the Beatles’ song ‘Rocky Raccoon.’ Now the whole Buster-Nancy-Danny-Bettie cluster of names and characters comes from the characters of the song. Kind of fleshed out, I suppose.”

“The figure reaching out of the bar with large yellow arm is the ‘Pageturner’ of the title, who has just turned a page of the Bible in front of him. This is Peter Gabriel again, or one — actually two — of his stage characters. The arm belongs to the glopman character. The head-in-flower to another.”

“Insert a picture and let’s move on. 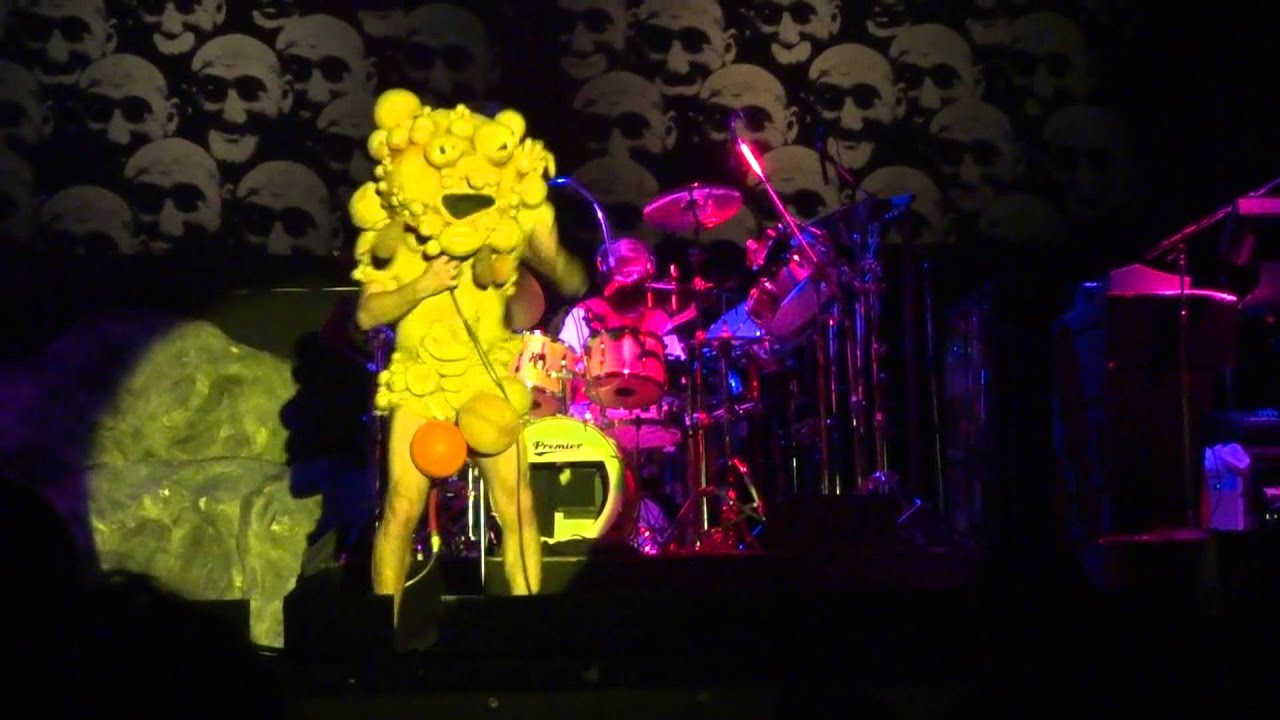 What are these slippermen, then? They are glopmen, though, yes?”

“I guess so Hucka Doobie. That’s a Mythos idea and Mythos ideas don’t translate well to this blog.”

“Sure they do,” counters Hucka Doobie. “Slippermen (characters; song) come from ‘Lamb’, just as this character emerges from a caricature of a lamb drawn on the side of Audrey’s bar — its front. The arm represents another of its own arms, or legs.”

“The ‘Lamb’ appears to be eating from the hand of another album representation. Their most successful I believe. ‘Invisible Touch’.”

“I’m checking now, Hucka Doobie, and the name of the album that image is from is called ‘We Can’t Dance’, dating from 1991. It is their last album before Phil Collins left the band to pursue his own solo career. And although it is the Genesis album immediately after ‘Invisible Touch’, their highest selling album, the release date is 5 years later. Success breeds creative complacency?”

“Maybe. Anyway, all serve ‘Lamb’, no matter their selling status. They feed and nurture ‘Lamb’, even from the future.”

“As well as the past,” Baker clarifies. “‘Foxtrot’ and its ‘Supper’s Ready’ and so on.”

“And that’s now synched with ‘Green Acres’. Pretty bizarre, eh?” Both Hucka Doobie and Baker Bloch smile. “And the woman perched atop the bar — a ‘Lamb’ analyzer. Like Tronesisia and Peter SoSo in a way. Is this Tronesisia?”

“We better move on.”