“I think we may be able to finish this off tonight, Baker Bloch. Good work!”

“How are your hands?”

“Fine. Neck’s getting a little sore, but it’s okay.” 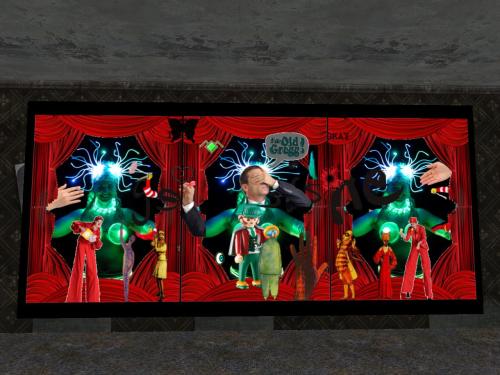 “We are at ‘see title 02,’ comparable to ‘see title 01a’ in that we have an image in the collage uttering the actual title: ‘I’m Old Gregg!’. The image is that of Twin Peaks Agent Dale Cooper, h0wever, and not Noel Fielding’s Old Gregg character from ‘Mighty Boosh’ again.”

“Right. It’s Dale Cooper. But the twinned women to the right and left kind of reminded me of Old Gregg.”

“Put a picture of Old Gregg up for all to ogle.”

“And the red curtains are from the Black Lodge again,” Baker Bloch furthers. “The whole collage, I suppose, could  be set in the lodge. 3 parts.”

“A kind of triptych. And more difficult to compose that the others (in this exhibit). You actually had Old Gregg’s head superimposed on one of those similarly colored women at one point.”

“Right. Lots of going back and forth with images and positions for this one, Hucka Doobie. ”

Hucka Doobie studies further. “So Genesis album figures reappear, just like we had in ‘Pageturner’ to begin (the exhibit). They’re — let’s see — split into 3 pairs according to panels this time. We have more explanation of what’s going on, perhaps.”

“Well, Baker Bloch, we have framing, tall legged red people on either side to begin, man to the right and woman on the left. They are ‘presenters.'”

“What is presented or displayed? 3 panels yes. A triptych, red and blue-green being the dominant colors, a clash of Boosh’s Old Gregg and the Black Lodge’s Red Room from Twin Peaks. A clash of comedy and tragedy perhaps. Genesis reappears (as stated). The inspector of ‘Detective Drunk’ comes back in the centre, inspecting the unusually small head of Duke from the Genesis album of the same title. This would be before ‘Invisible Touch’? Please check, Baker Bloch.”

“And then… so the inspector has found something to actually inspect in this one, Baker Bloch. A real mystery with a real truth within. Patty Duke? Patty is another famous twin cousin through her ‘Patty Duke Show’ from the 60’s. Another thing to check there, Baker Bloch.”

“Mounting up!” he playfully complains.

“The central figure Dale Cooper has one hand over his eyes, as if blinded, and another holding a dart that points to, well, sometimes the viewer of this collage I suppose. Like here LINK.

“Or here,” Baker Bloch adds. “Although in checking it’s not quite as obvious in this one.”

“Thank you for inserting those pictures. Do you have the further links I requested?”

“Okay, the ‘Patty Duke Show’ is here, and I can’t remember the other thing you requested.”

“Neither can I. Moving on, then. We have the two hands of ‘Twisted’ reappearing in the present collage. They seem to present the duplicate women to the right and left of the central Dale. Front of hand to right; back of hand to left. This is past and present, like Windom, Kansas (in the present) replaced Laura, Kansas (in the past). This is most likely the action of Bowie in some guise. How powerful is Bowie? He’s possessed poor little Wheeler and sent her to jail (for example). And he wanted Baker Blinker for same. Laura of Twin Peaks is similarly possessed, like with demons. Bowie fought a demon both in Omikron City and, as Little Tonshi Ashokan and perhaps others, in Olde Lapara Towne. That demon’s name there was and still is Astarte, disguised as the name of a Second Life sim (and butterfly). You are still running from Astarte. That’s most commonly called Astaroth in Omikron speak, both beginning with ‘a star’. This is Bowie,” Hucka Doobie reinforces.

“Right. Thanks. I suppose I gave Bowie so much power because he’s the star — or will be the star — of several and perhaps many future (audiovisual synchronicities). Beyond ‘Peewee Big’, and beyond ‘One Pink’ which he’s also in as Philllip Jeffries.”

“Heading to Philadelphia instead of Pittsburg, yes. East not west. But still witches all around. Oz.”

“We should end there, Hucka Doobie?”

Hucka Doobie looks again at ‘see title 02’. “Not quite. The (Baker Bloch hands Hucka Doobie a slip of paper) — thank you — *’We Can’t Dance’* figure feeds not a Lamb here, as in ‘Pageturner’, but seems to stroke the seaweed like hair of the unknown woman looming above him — it. Renaldo McDonnell applies hairspray to her hair in the same panel. It’s unusual hair in that it’s glowing. We can assume it’s the same as the seaweed type hair of Old Gregg, more unusual(ness).”

(note: later we both realize it is representation of Olde Gregg’s glowing manjina as well)

“And then, as I’m looking, even the hand to the extreme left seems to be touching her hair, as if in admiration of its feel and look. But, let’s see, in the right panel, the Renaldo O’Donnell’s hairspray is heading the wrong way — away from the woman’s hair. The attached big hand is forwards instead of backwards (perhaps not admiring so much). Wheeler Wilson again, I would venture. Forwards and backwards. Left and right.”

“What about the dart?” asks Baker Bloch, trying to move the analysis on.

“The dart is pointed at the viewer,” Hucka Doobie repeats. “The viewer could be the same as the woman. You found an Old Gregg avatar in Morrison, along with a Donnie Darko. They may even be lovers created for each other. Maybe tragic lovers. The dart may indicate that the woman is Old Gregg in truth. The other, then, could be Donnie Darko, who appears in the (audiovisual synch) *before* … well not quite before, but in another of your bigger synchs. This weighs in. Bowie knows. Investigate with your investigating feet.”

One response to “Bodega? Analysis 07”