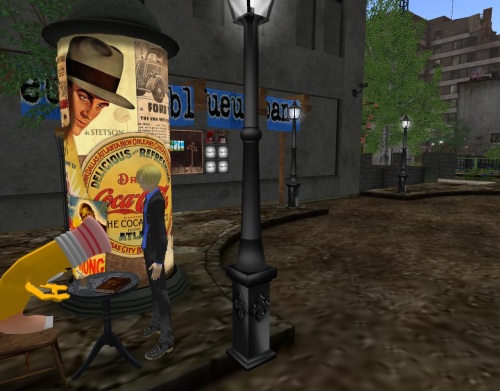 He decided to confront Eraserhead Man when the latter seemed almost passed out from his 4th 4 shot latte of the evening. EM had been wrangling, wrangling, wrangling with the roles of both Smithy and Doris Drone, going back and forth on each one with the different, involved actors. At this very moment, the famed director was even casting about in his mind recasting someone else as Hebert Dune besides Sandy Beech to better fit the mood. Not the best timing for an approach by his antsy production star, then.

“Is that the latest version?” the towering Sandy questioned about the rust colored book on the table. He had a weird notion just to snatch it and run off right here and now. The director didn’t answer immediately, didn’t even look up to acknowledge his presence. *Meditation*, Sandy then realized. EM was in really deep with this one. To startle him might even induce some kind of heart malfunction, he further contemplated. Best to walk away, his better senses commanded. Confront EM another time. But: no. His worse senses shoved their way to the fore again, fortified by insecurity, greed, envy. He slammed his hand down *hard* on the book he knew was the production script.

Eraserhead Man came out of it by shouting “ice cream anyone!!” at the top of his lungs, then slowly, gradually managed to free himself from the self induced trance. He looked around, blinked his eyes. He looked up at Sandy. “Sandy! I was just thinking about you! What a surreptitious interruption of my nirvana state. *You’re* *fired*!!”

Eraserhead Man stared at him blankly, watching Sandy Beech squirm like a fish in front of him. “I’m just kidding!” he then uttered after a pretty long interval. “Sit down!” Eraserhead Man then realized there was not another seat at this table. “Oh, let’s just move to the porch. Give me a bit to further compose myself! You go ahead! Any seat will do! Just give me a moment please!”

A shaken, humbled Sandy Beech dutifully took a seat on the porch behind EM and waited on him, but after about 15 minutes the director simply got up out of his chair and walked in the direction of his bungalow down the street, not turning around. The next day he acted like the event never happened; work relationship back to normal. And maybe, Sandy pondered then, it never did. He was a little high on those wacko pills Laverne Glam had sold him, after all. He remembered Eraserhead Man even glowing a bit in hindsight. *Never* do drugs around EM again, he told himself. Ever.

But: Lavern Glam? How did *she* get here?

Wait. I think it was Franklin Bowers who sold him the pills. Yes. Lives in the zircon encrusted RV out on self named Bowers Beach just outside Urbane Blue. We might visit him next. Not for pills, but just for another shoot.

“Frank Bowers!!” Eraserhead Man shouts upon waking up in the middle of the night.