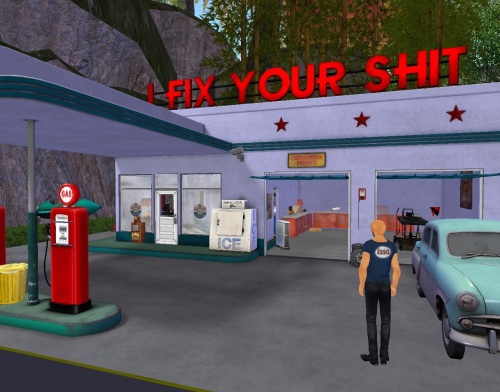 After the body was found (by Mann’s Dogg), the funeral held (1st funeral after quarantine lifted (!), but still 6 feet apart for grieving parishioners), and the investigation wrapped up by Tank Ferguson’s team down at the station, TronAxis, now Peter again (Peter Esso, or, really, Peter Osseo if I can figure out how to transform the Esso t-shirt easily (see former Esso poster turned Osseo poster back at the purple Marz house in Tyranea)), stands before Gene Kelley’s old place, the town’s Mr. Fix It now 6 feet down in the ground itself over at Storybrook Memorial Cemeteries just off Little Miss Muffet Highway in Slabtown — a kind of permanent quarantine if you will. He’s saved enough money from recent criminal activity to buy, which he does shortly after the dirt is padded down nice and hard atop Gene’s grave. Greasy hands will be the order of the day for many to come. Wife Venus Flytrap (Wheeler in disguise once again) will have her hair slowly turn from blue-green to blue-black to black itself in following months because of the touching, the fondling. For Axis truly loves his sometimes on sometimes off wife, still running from the law like a virtual Bonnie and Clyde but always ending up on their feet. The lucky aspect this time is an inept police department led by a man controlled by his hips and not his head, just like his father before him — Jeep or something, Axis thinks here in his ruminations of victory. The gas station will be a perfect headquarters/front for further criminal activity.

He didn’t murder Gene Kelley/Mr. Fix It himself, but the death was handy for him nonetheless. He and Venus will be staying in Storybrook now for a while. But those pumps will have to be replaced, he thinks while staring over.

He goes over to the town jail to thank former photography and calligraphy teacher Tom Banks once again. 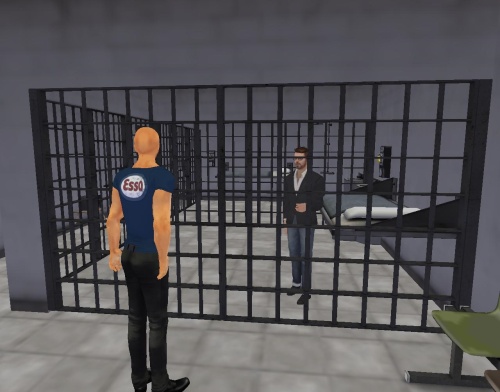 “Think nothing of it.”