“Look out below!” she called, her hair not getting wet quite yet. She wanted to add, “femboy above!” but caught her tongue. Why would she say something like that? Then it hit her OOOF! She remembered. Right in the stomach. Good thing she wasn’t pregnant!

They later talked about it in front, a looked over final animation. Then they’d have to leave the bus or else chance just repeating themselves over and over, however pleasant the experience was the first time around. She knew she loved playing the drums now — she could find others. She knew she dug dancing, and actually there’s a line dancing joint just across the lake they can go to for that. As far as living quarters and being able to sleep and do some other stuff via animations, they had found the perfect spot, also across the lake but a little further back from the water, behind that other interesting club that always seems to contain so many avatars. She went yesterday and looked them over. All AFK, all ready to serve their purpose while the owner was in all likelihood absent from the scene. How interesting, she thought. Kind of terrifying but still…

She had no desire to join in this kind of fun. She had Johnny for the moment. When they moved into the Big Boy Apartment, she always kept a hand over his face, though; imagined someone else’s over top of it if possible. Looks aren’t everything, she knew, but they were *something*, and Johnny had none really. But he was talented in other ways. 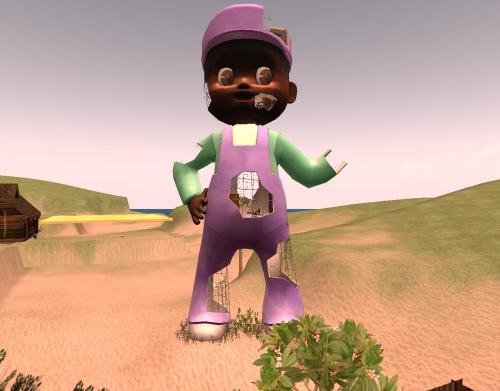