Killed by a crashed airplane. No onboard casualties listed. Starbuccaneers remains closed indefinitely for a period of mourning and needed repairs. 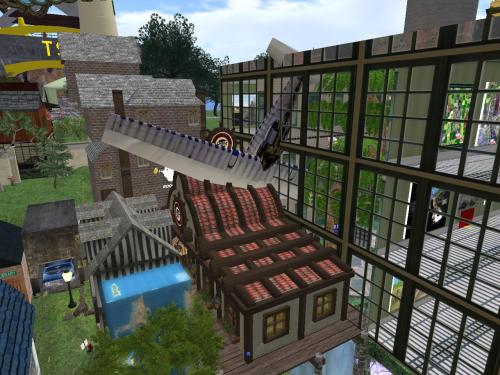 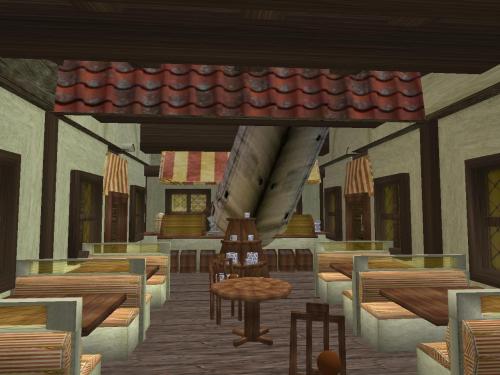 Very reminiscent of Donnie Darko. And there’s a time loop involved as well. In one reality she didn’t die. In another she did. It was suppose to happen. And, anyway, she could come back tomorrow, good as new. Good as old. No need to grieve. Something that was suppose to happen at this point in the script is all. Stop your blubbering. Here’s a hanky.

Baker Bloch’s father Space Ghost was so upset that he walked around Collagesity all day without his cane, forgetting he was handicapped. He loved Starbuccaneer as well, perhaps even moreso than the son. While they were sitting at Karl’s bar on Tuesday, he planned on confessing something to Baker but got too drunk to really do it. Let’s listen in again.

Another round Karl (hiccup).

Maybe you should slow down there Space Ghost old man, old chap.

Great you could take over the bar while Rhoda was dead, Furry Karl.

Rhoda? He or she’s right upstairs. We decided to switch bars. Too much blood and shooting down here for him-her. He/she’s prone to it. I don’t attract that crowd, that element. I can better control a situation. PUT DOWN THAT GUN! (dramatic pause) See? Just a joke from me. Still here.

It’s the… sorry Karl, go ahead…

It’s the violence from his former bar. That’s also why I removed that cursed picture of him-her and Shark, another him-her actually. Lordshore Bridge pic returned.

(Along with Clock, Baker Bloch then thinks, staring at the far wall. Why did *that* return?) 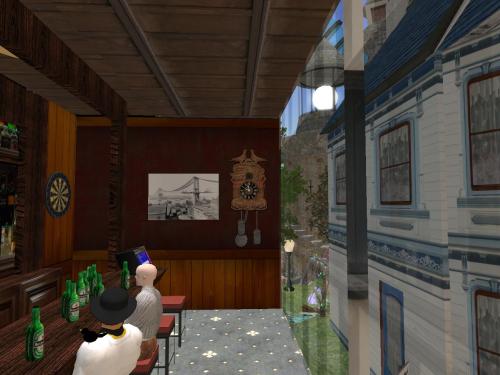 Well put (hiccup) son. Here’s to time moving forward, moving onward. Up up and away. (he downs his beer in one long swig)

Let’s get you home. Where is your home again? I don’t think that’s quite been established. Carrcassonnee said that you usually sleep in the portal now? Explain father.

Yeah, I’m gonna seal that thing up with a big, grey rock. You better find other digs if that’s your hangout, Space.

I live in Muff-Birmingham. In the clouds. Cloud 9. Number 9 Dream. Night night. (he lays his head on the counter)

Well, I gotta take him somewhere. The other day, I found him sleeping under a rock, speaking of rocks. What rock are you going to seal the passageway with, Karl? Just curious.

(Just then a phone rings. Furry Karl goes around the corner and into the back corridor to answer it. Baker Bloch and his father cannot hear what was talked about through the wall. He returns several minutes later.)

Well I may have a place for your father to stay. Turns out this time Rhoda is actually dead. Some kind of symbiosis with Starbuccaneer, along with the ballerina next to that rock outside. 3-n-1. They discovered them all combined together in one body at the morgue, during the autopsy. So, for Space Ghost in the immediate now, he can live upstairs after we clear out Rhoda’s stuff.

That’s *terrible*. We’ve lost not one but three Collagesity entities in one tragic swoop.

I knew that already. I think it’s time to move to the harder (hiccup) booze. Karl, break out that bottle of (burp) Boos Number 10 (hiccup). The one made (hiccup) on Mars.

We call that *Le*Mars in this dimension. It’s a stopover on the way to Neptune. Karoz has been there not once but 3 times now. 3-n-1.

Has he made it to Neptune?

(Another phone call. Furry Karl visits the corridor again. He takes a little longer this time to return.)

Sealing’s off for now. Looks like we’re going to have a crowd in here soon. Upstairs boss says the Portal’s opening up from the other side.

Yeah, I don’t think so. Shame about Rhoda. Shame about Starbuccaneer. Shame about the ballerina girl. 3-n-1. Damn shame. And now we’re going to have visitors because of it. Muff-Birmingham.