Is *this* the true beginning of the Bogota series? 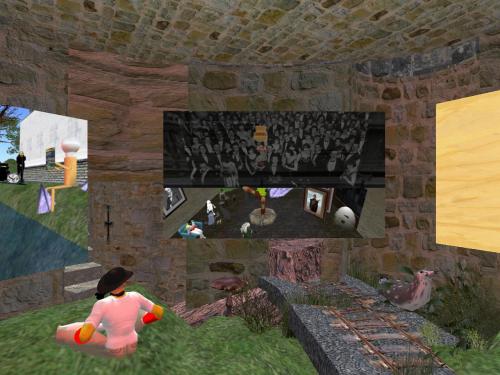 I’ve thought this before; false start, however. But — interesting — that picture texture is now rezzing in for me where it wasn’t before.

Maybe this time I’ll create a loose set of collages based on Collagesity settings. Perhaps meaningful that several Moon of Moon characters (Prissy, Bender) show up in “Weighty Past”. They’ve been almost completely absent from the blog since their creation in Feb./March of this year. High fantasy indeed.

I don’t know neither.

Whether it’s the start. True start.

Shucks — hoping you were back.

Instead, Wheeler helped me as Baker Bloch out. Interesting. 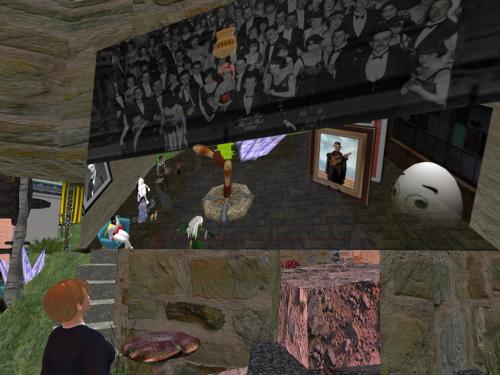 “Prissy and Bender, eh? But as I understand, that rock and Tyle Cube also represent the 6 sided Moon of the Moon, with equilateral gravity now. Correct?”

“Correct, Wheeler. What about Rutherford “Booger” Hayes? He’s a collage regular as well. He has a history within. And there’s Spider — Spider! Remember when Carrcassonnee stated he had to go back into the collages. Well, perhaps there he is! Maybe he’s not in the gazebo any more. Maybe he’s found a way in.”

“Well, I’m more interested right now in the Moon of the Moon and how to get back there. There’s a labyrinth on that satellite’s satellite. Like Rock 01 has a labyrinth, and the same kind (7 circuit). Maybe you better stick that in your pipe and smoke it.”

“The Moon of the Moon was indeed squared — squaring the circle, or, in this case, sphering the cube. That expression just came up in a Space Ghost episode I watched today. Its name was Piledriver LINK. It starred my father, of course, and then *his* grandfather, who looked like my father with a grey beard pasted on his face. He mentioned a squared circle just out of the blue (4:40). Here, I’ll pull up the related video. We can go up to the theatre and watch; I think you’ll like it.”

“Wheeler, you’re the only entity I know from Collagesity that has to regularly use the restroom. I can wait.”

“I’ll be up at the gazebo when you’re done. Perhaps talking to Carrcassonnee. Perhaps not. But I’ll be there. Waiting.”