“The Man had many centres he could manifest out of his inventory, but, legend says, when he found wo-Man he stopped the process and threw up his arms in glee. Thus Eve from Eden is born and Adam, The Man incarnate, called it D-vine.” 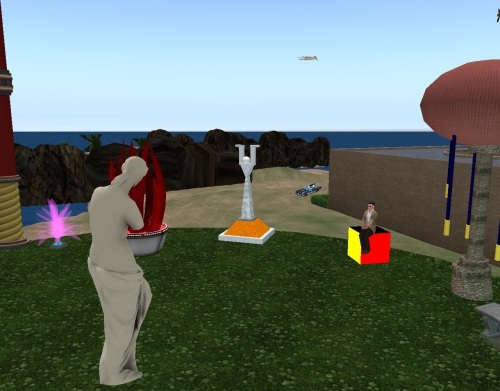 Larch (later: The Man himself) halted his creation story spun atop his spinning cube to look down at Superduper Guy and Batty Man’s “backfire-mobile” (his word for it) pull up next door.

“Pow POP!” it went when stopping, and Larch imagined small cartoon clouds with these words emitted from a smoking muffler. Nightshift worker Mrs. Dumbledwarf to the south became even more awake when the two super heroes slammed their car doors, then spotted Larch on his rooftop workshop and threw up their arms in greeting, calling “What up, *Man*!?” in unison before heading into their mansion, not waiting for a response. Because it never came.