Aptly named Arthur Kill, just off some fresh kills in Staten Island, decided to hop the ferry over to virtual reality and Lindenwold to see if old boss Marty had any new assignments. 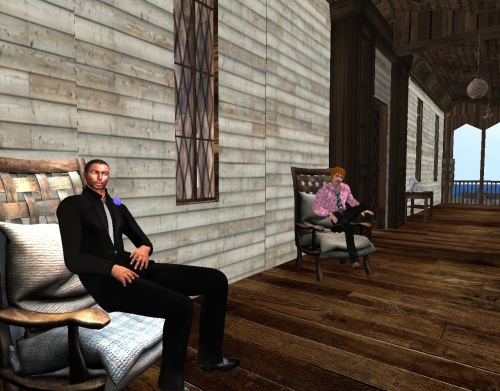 “Sorry everything is a little up in the air at this moment, Arthur,” he apologized about the levitating objects in the yard.

Arthur Kill stands up, preparing to teleport back to New York City. He doesn’t like to kill time unnecessarily, unlike most things. “Let me know if you do,” he declared without emotion.

“Wait.” Marty was glad of the rare appearance of his former chief assassin and decided to cook up something on the spot. “There’s a, er, *Mouse*. At the end of a Dead End Street. Big Black Smoke. That’s all I got.” Mouse was code for Rat.

Marty looked out at the landscape here, as he had been doing when Arthur abruptly showed up out of thin air. Urqhart Hill, he thought, staring straight ahead. That girl at the top. She’s been there for hours. He can’t stop looking at her. What’s she doing, what’s she up to? Smoking weed? Marty would like some weed. If she stays there very much longer, he’s going to assume she’s using drugs and just walk up to her and ask for some. Not the hard stuff (like before). Just weed this time. She looks the type, yes. A grass chick — sitting in the grass up there. Marty realizes he must answer Arthur Kill.