He had acquired the list of Pipersville landmarks and was checking each one individually. No sign of life at the old Weston residence out on Sandpiper Lane, and the house itself seemed to have mysteriously shrunk. Or maybe he was just gaining weight, he rationalized — or… height? He was still a growing boy after all, merely masquerading as a soldier man. At least he wasn’t tin like his friend from the sticks, way out in the woods. He always forgets his name, though. Johnny Something. From Somewhere. South Something. Johnny South — I believe that’s it. Cpt. Americus might know. If he wasn’t dead in his grave from that atom bomb dropped on the town only last year. Seems like two. 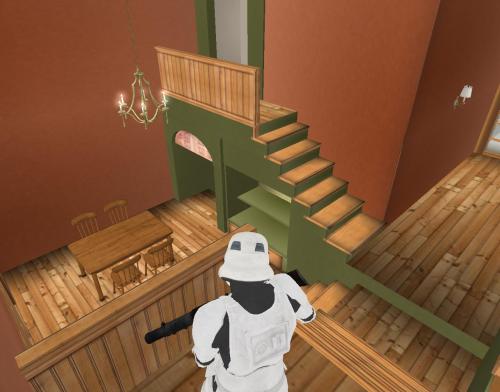 He finds a couple in bedroom cutting some small z’s and shoots them dead, blowing the smoke away from his gun hole at the end in satisfaction of a good day’s work. And it’s only 2 in the afternoon, he thought, checking his white watch to match his snowy outfit. Two again, hmph.

The woman hobbit’s name was Grabby, because she did from the male, a Chestershire example named Givey. Givey Witherspoon, hence Grabby Witherspoon, since Hobbits didn’t really get into modern marriage things like the wife keeping a given surname. So in that one respect she *wasn’t* a Grabby, I suppose. Accepted what was given to her by the husband. But the name was about it; all else was taken, including the family heirloom silverware the husband wanted to donate to families of the unfortunate wee ones from their coastal region eating by sea monsters each year. But I diverge. We must return to Lt. Salt and his exploration of old Pipersville links, eventually leading…

… to the Pipe Room of course. The Room.

He hears footsteps outside: Jim A. and lover Sweet Alice, ready to pose as Venus once more. Nowhere to hide!