She stands at a crossroads outside the motel. David A.B. and Linda Halsey are still talking in the lighted patio outside the lobby. They would be doing this as long as the motel itself existed, she realized. She stares toward the mysteriously highlighted red-blue-green gate to the east (sky-sea-land). She’s *been* here before, she realizes while studying it and almost being hit by a right turning, beat up station wagon with Illinois license plates in the process. BDR529. Not quite all the numbers but getting there.

“Where there are churches there must be liquor stores,” she remarks confidently while walking between two. She goes in a direction no Yoko has ever gone before, messing with the patterns. 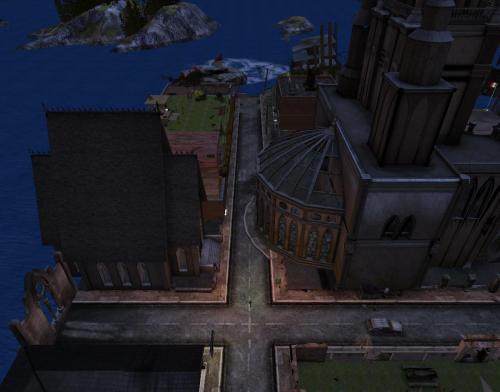 “So this is what you do all the time, Baker B.?” asked observing Marty at Collagesity’s Blue Feather Table Room.

“Pretty much,” admitted the male baker version to the famous composer/musician variant.

“W-where is she going? She’s just heading off in a random direction.”

“What is this place?” Marty further queried.

“Heartsdale. It’s in title.” Baker looked over, confident in his randomness. “She’s been here before,” he added. “Or *I* have.”

“And this has — something to do with John.”

“Absolutely,” I crowed. “Bakersworks,” I said to end.