Through my avatars, I often like to teleport directly into the center of a sim that’s caught my interest to initiate further investigation (if desired). Using this method proved fruitful indeed for Wyrd of the Maebaleia or Satori continent. Inhabiting the ghost of Bracket Jupiter, I found myself also in the midst of my former neighbor Art Oluja’s “Art and Weird Words” parcel previously mentioned in this September post. I began to unlock several mysteries that had been haunting me…

… like the nature of the cubic bird creature trapped in a giant mason jar found on Art’s Minoa lot just before she sold it about a week back. I discovered not one but two such birds located in a heavily windowed building just to Bracket’s west, red and green mates named Rose and Jade respectively.

And then I found reference to a jar in a picture on the wall. The technique used here is called blackout poetry. 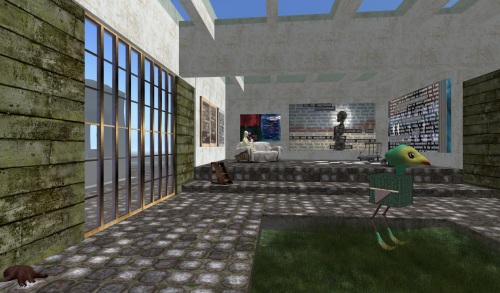 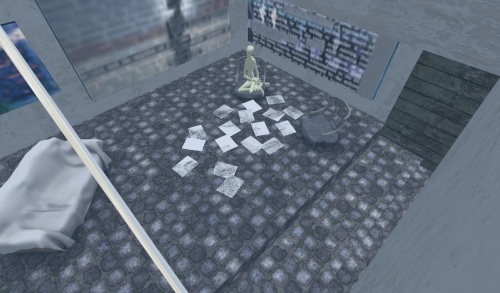 I do not know the rational behind the 2 large black and white cubes placed beside this structure. Perhaps they have something to do with Art’s lauded 2015 LEA installation named “Metamorfaces”.

Other objects concerning the installation are found in the 2 treehouses on the property.

And in another book here we have that blacked out sheet again highlighting a jar image. 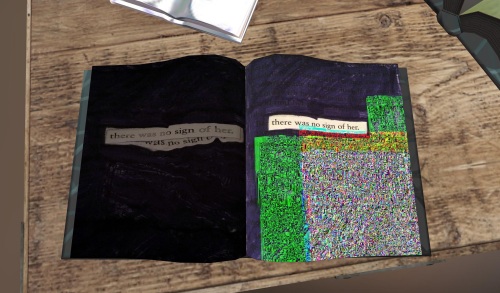 More pages from the same book. 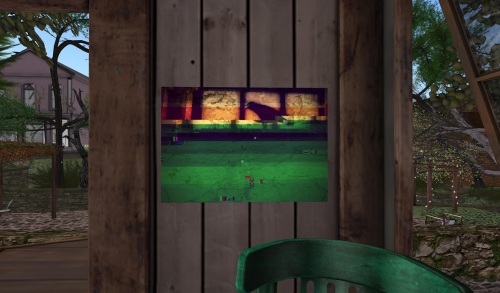 While in Wyrd, the deceased Bracket also rocked with a new flesh and blood friend on the porch of Maya’s Espresso Cafe just off Route 8B.

“My legs are gelatin,” Brenda said in her rather booming voice to the approaching Old Mabel, coming from the direction of SoSo. “I’m not the athlete I use to be. Difficult to train now with all these structures surrounding the woods. Before I had The Freedom.”

Old Mabel had reached the giant female warrior by now.

“Wow. Your legs are really going crazy there. Maybe you better stop today. Try again tomorrow.” The Martian wondered how long she’d been at it. Hours?

“No, I’m giving up — giving back Spongebub his money. That old lighthouse isn’t going to budge,” she gauged, looking over her shoulder and then back down at her quivering limbs. “Been sitting there in that one position too long, all crooked and such. Rooted in the ground it is, like a demented tree. Now if we had an *Unch* lighthouse, well, things would be different. Unch has it right. Have you met him?”

Old Mabel realized she hadn’t attempted to locate Unch in the forest at night, an oversight. Daytime was no good for that. But so much going on right now in Collagesity and elsewhere!

“The intelligence of paper, the mobility of scissors, the persistence of rock. Best qualities of each rolled into one super-being. Unch,” she said again.

“Well, I’ll have to make a concerted effort to meet this — God-like entity.”

The giant stood up, testing her legs. Chilly night had swiftly moved in. Both looked up at the tilted lighthouse and its lit window.

“Where should we go?” Brenda then asked Old Mabel. “Hard for me to fit in places, let alone act in secrecy.”

“That blabbermouth?” the giant then said, taking the Martian by surprise with this turn. “No, not Unch. Not the forest. Or — wait. How about the other side of the forest. Away from Unch. That abandoned cottage and grounds.” She rubbed her giant chin thoughtfully. “Yes, that will do. Why hadn’t I thought of that before. We can head up Robin Lane then move south through its western edge.”

“Or we could just teleport.”

“Yes, this is good. The wall is just high enough to keep me hidden. I will make this my place now, if it isn’t already. Yes, I’m remembering backwards now. This is already my home. This is where I live. Welcome.”

“Thank you,” said Old Mabel, trying to figure out the giant’s backward talk.

“This is where Jiff and I live as husband and wife. I was his servant, his prisoner on the Ryan Industries vessel. No, his fellow prisoner. And we are not husband and wife…” Brenda paused, trying to sort out the correct timelines. “Play a game with me, alien woman,” she then said. “Roshambo.” Old Mabel stated that she had not heard of it, prompting Brenda to explain. “We go 1,2, and at 3 we both make a hand signal. There are 3.” Brenda demonstrated the three hand gestures involved in the game to Old Mabel. They played.

The correct reality manifested around them now. This was Brenda’s cottage, just like Snowbob had his own house on the other side of the woods, in Collagesity. Things were sorting out. Good ol’ roshambo!

One problem, though. “Who are you?” a comfortably reclining Brenda asked of the approaching Old Mabel.