The two pictures below are of the newly placed “We Have Arrived Let’s Get Out of Here” Memorial to Collagesity founder and then deserter Ryan “Skippy” Rye, the front of which depicts his landing in the Rubi area during the year B.L. 2130 (with the B.L. standing for Before Linden in case you didn’t know). This was during the golden years of Lemon, when the high seas were dominated by lumberjacks and astronauts and the air was constantly filled with confetti and popped maize.

Skippy ordered Castle Ryan to be built by his slave equivalents, deemed it amateur and stupid, and departed from what would become the Minoa sim after only 6 days, steering his land-ship back into the Rubi Woods and departing through its central portal for destinations unknown to this day. 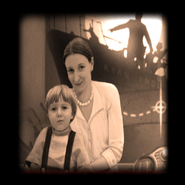 Baker walks out of that mysteriously appearing door in the Blue Feather again from the Table Room and notices another opening he hasn’t paid much attention to, down through the years now: the double iron gates into the property of his never seen neighbor Clarity Dagostino. The two neglected openings become linked in his brain. No stopping now, I suppose. 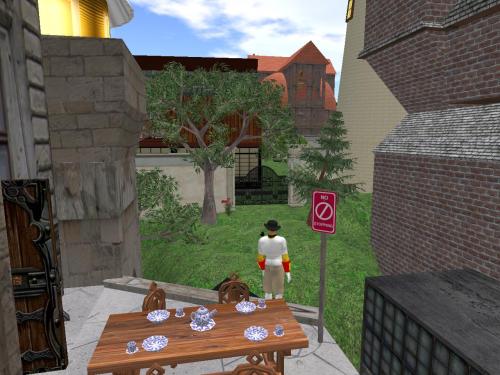 Just after that, he goes back into the Blue Feather to find what he originally thought was *another* “intruding” avatar like the one encountered the day before — get to that in a moment — but what turned out to be a mere 2-d flattie placed there by unknown hands. 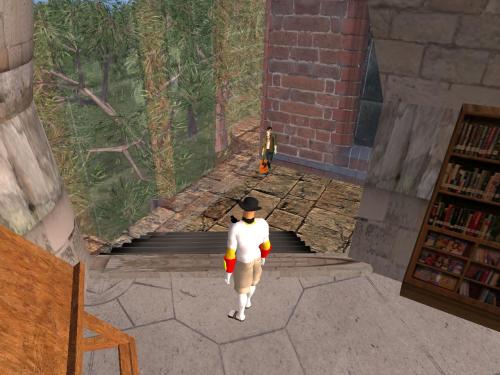 The flattie holds a guitar with the name Mykall Skall scrawled on it. I quickly discovered this was the fellow who founded the Virtual Hotel Chelsea (or Virtual Chelsea Hotel), located in a sprawling Heterocera continent municipality I simply call VHC Town in this blog after its dominating, centerpiece structure. This could be significant for several reasons. But what next caught my eye was the t-shirt the flattie was wearing: it’s obviously suppose to double as the one John Lennon famously posed in during a promotional shoot for his “Walls and Bridges” album. And then the flattie’s army jacket is also a Lennon inspired garb.

Back to the intruder from the day before. Baker Bloch had decided to open up the formerly banned property of the Blue Feather so that visitors could take a look around the recently upgrade Table Room and its mysterious door (etc.) if they wished. Very soon after that, Baker found a male avatar appearing by his side as he positioned a representation of the 4 Beatles walking Abbey Road on the wall of the room, just at the top of its stairs. Seeing only a naked (male) human torso for the avatar’s profile picture, Baker decides to quickly delete the Beatles cutout and temporarily log out of Second Life. 10 minutes later he returned, with no avatar in sight. He quickly reinstated the ban on the property. He didn’t return the Beatles to the wall — until the second intruder showed up the next day. Because, of course, both involved *Lennon* now. And Lennon was and is a major player at The Table itself, projected to sit there under the guise of Salad Bar Jack LINK. 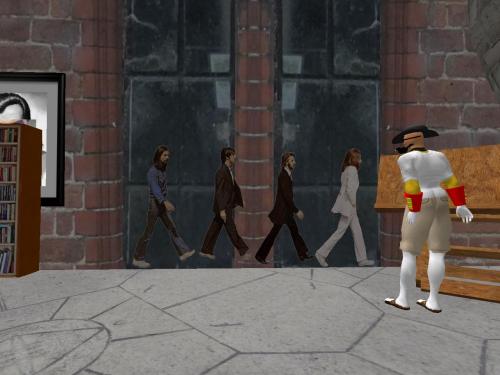 I must be forthcoming here to fully explain the oddness of the juxtaposition. Through Baker Bloch, I actually *did* rezz the Mykall Skall flattie in that corner of the Blue Feather but it was a spontaneous action on my part. I didn’t know the flattie would be projecting a strong image of Lennon. And I didn’t make the avatar from the day before show up just as I was positioning Lennon and the rest of the Beatles on the wall just up the stairs from him. I was merely rezzing stuff spontaneously here and there, going through my inventory. It was, as one could say, an *accidental* juxtaposition. But we know in the Blue Feather that such accidents are too frequent to be called chance. This is synchronicity again. 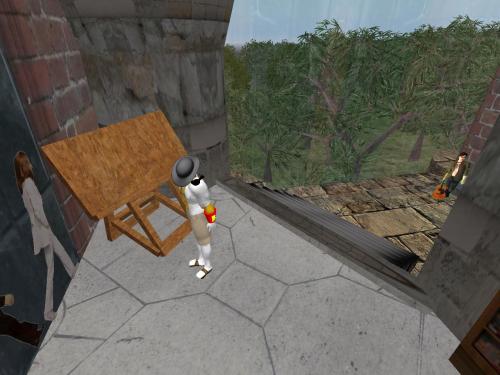 I’m going to perhaps shock the reader by stating that I believe Lennon himself (or an official representative thereof) wanted to make his presence known in the Blue Feather. He knows I’m working on The Table and he is to sit there. He is, broadly speaking, the gateway figure into (“Billfork”) and out of (“Uncle Meatwad”) my peak grouping of audiovisual synchronicities created during the Pierre Schaeffer era of 2004 through 2007. He knows this is important to protect and eventually disseminate. The organization goes beyond the Oz/Floyd Paradox.

I imagine Wheeler will be super pleased to find out about this turn of events when I next catch up with her.

“See Hucka Doobie? There’s definitely a door there that wasn’t before. And watch when Tin S. Man stands up — go ahead and stand up please Mr., um, Man.” 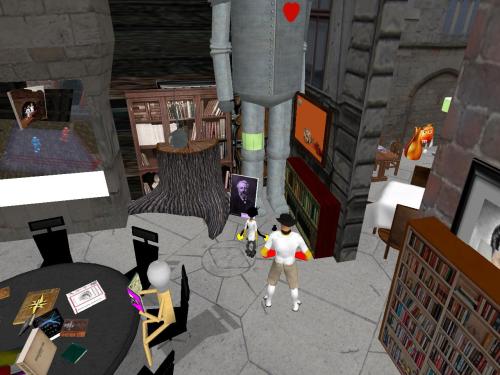 “He stands directly in front of the door,” Baker Bloch continues. “And the Kubrick lampshade is exactly the size of his cylindrical thigh.”

“Where does the door lead to?” Hucka Doobie asks.

“I’ll show you. Go ahead and sit down again Tin S. Man.” The giant does as requested. “Then I just open the door, see, and walk through.”

But Hucka Doobie notices Baker Bloch disappears slightly before he walks through the open doorway. And if Baker could have bothered to turn around at that point, he would have noticed Hucka Doobie disappearing from view as well.

“Go ahead and walk through, Hucka Doobie,” Baker calls from the other side. 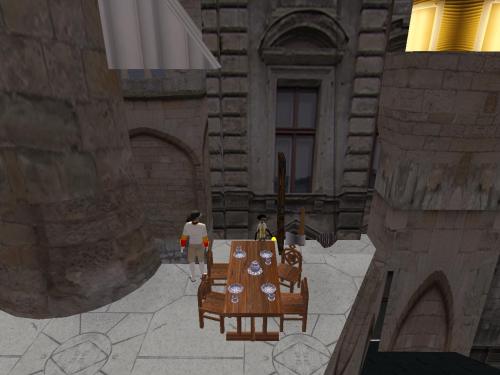 “Are the door and the table the same size?” Hucka Doobie asks.

“Not quite. Now let’s go upstairs and look at the other things. Oh, and there’s also Tin S. Man’s axe poking through over there. And a bit of his sitting stump. Keep that in mind.”

“Behind the door from you. Here, let me shut it.”

“Oh, right,” Hucka Doobie says, now seeing the objects. “Looks like [the axe handle] might be made from the same wood as the table.”

“Maybe. And you’ll notice the door has completely disappeared from this side when I shut it. We’ll have to walk around and back in.”

“Go ahead and stand up again Tin S. Man,” Baker Bloch calls through the floor now as he reaches the corner of the room above him in the Blue Feather. In order to get to it, however, Baker had to drop down into the first floor from the second and take the teleporter up. Wheeler insists that these Lemony ways of traveling through the building remain in place. “Traditional — like Castle Jack,” she says, always with an unwavering voice. But no one seems to mind that much. You just have to go from first to third to get to second and The Table, unless you come in from Perch, which is tricky in itself. Most of the town believe and take faith in the Lemon past of Collagesity, before the coming of the Lindens. It’s one of the things that sets it apart from most artsy villages of its kind. The proximity to the Rubi Woods and its ancient growth helps in this respect.

Hucka Doobie caught up with Baker Bloch, but, once again, couldn’t see him in this corner, even though she heard him. But both saw the projecting funnel hat.

And the impossible second Tinman stump.