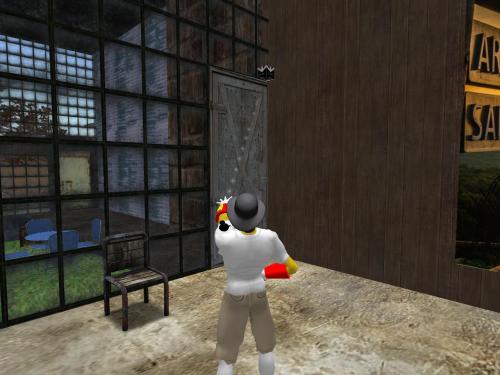 Sadly, Baker Bloch indicates to his landlord through the scripted box above the door that he won’t be keeping his basement rental apartment. He’s already done the same with his second VHC City rental at the top of Bemberg Towers. Pulling out completely from the town, he is. Dreams of owning a gallery there called “Something To CHRO About” scuttled. He’s going back to Collagesity with the rest.

He opens the door and crosses the line between sims Bemberg and Sister just outside. An avatar immediately shows up, a dapper male in a black suit with white hair. Kohakt Resident was the name.

“Hey ho Soho hobo,” he exclaims happily. Baker Bloch attempts to be friendly and says hello, then asks if he rents around here. Kohakt mysteriously says, “Well this isn’t awkward, it’s fabulous. I wouldn’t because I am stripped rent wise already.” Baker Bloch was confused. Did he mean “strapped? (rent wise)”? Probably. “But it’s okay,” he quickly added. “I love the area.”

Baker Bloch voiced his suspicion. “You aren’t the *landlord/landlady* are you?” thinking that this may be Summerhill Nova or one of her cohorts in disguise. Why else would they show up just after he indicated he was terminating his lease on the apartment.

“Hey noo, relax lol,” Kohakt said to counter this, though. “Search and enjoy, that’s my motto.” Baker said that he liked the way Kohakt talked. He reminded him of some beatnik poet from the ’60s.

“You heading underground?” he then asked.

“You’ve been down I assume.”

“Of course,” Kohakt answered. “Please. After you my friend.” Apparently Kohakt wanted Baker Bloch to be his exploring buddy. Baker mulled this over for a second, then acquiesced.

“Have you been past the crocodile pool?”

“I think so. But it’s been a long time since, well you know.” Baker was thinking again, making Kohakt prompt, “Well go on, I’ll be right behind you.”

And that was about it until the blue door. Baker went down the stairs outside his basement apartment leading to the underground but Kohakt didn’t follow. He looked back and saw him flying around aimlessly above. Was he that clumsy of movement? Baker asked himself. “Down here,” Baker clarified, making eye contact with him again. But when Baker reached the bottom of the stairs and went to the left toward the double doors heading to the heart of the underground, Kohakt was still not behind him. Baker gave up, and im-ed him, saying he’d have to explore the place on his own and hoped he enjoyed the journey. Baker opens the white door and passes from Sister to Bemberg once more. He stares at the blue door leading back to Sister. His own fate door. 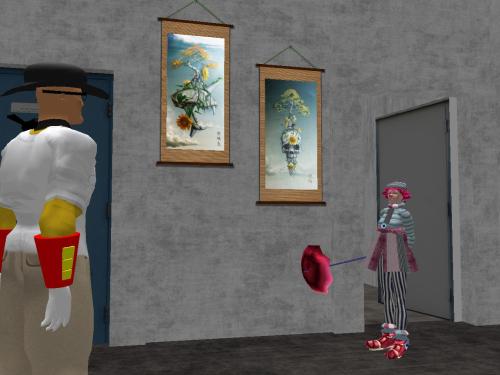 Wheeler bursts through the white door. “Can’t act, can’t act, hmmf,” she says with a broad smile. Baker stares at her. “Well, it’s getting cold down here. Lead on! Let’s find The Musician going ’round in circles and make this a wrap.”