“Howdy over there,” the now white Paul says. No clothes again except the underwear, to mitigate his demon nature as much as possible. “I’m going to clean you out today, hehe. I have a whole city to feed for a couple of days. Malone Central.” Paul tested the walking raccoon. “You’ve probably heard of it,” but he almost said that as a question.

“Nope,” states Rocky plainly. ‘But I’m glad of the business. I’m a novel writer myself, but the second book is going slow, and my original tome isn’t selling as well as I planned. Long story. So have *you* ever heard of ‘Bible Truth’? That’s my town, I guess you could say.” 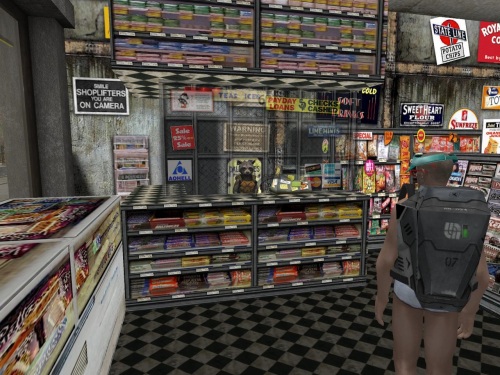 “I’m afraid I haven’t. But I’d like to spend more time in The Above. I’m from around here but not from around here. This store is new. I heard about it through The Grapevine. We get hungry down there in Malone Central, but have just existed on what grows on the almost barren Grassland for a long time. It’s the grass itself. We’re… well, we’re all pot heads I suppose you could say. There’s a robot… but that’s a long story as well.”

The anthropomorphic animal and almost naked man share a smile. “Well, help yourself. Munchies all around. If you’re into the healthier stuff, there’s a cooler with meat and cheese products in the back. Maybe some yogurt — yeah, yogurt. We don’t specialize in vegetables, sorry. There’s a garden around here you can loot for carrots, however. I don’t recommend it, though.” Rocky looks over at his gun, thinking back to the day he had to use it to chase off the clowns. Those dratted clowns.