For a while, Nancy spent a good chunk of each day in the High Line park where she could gaze down at the last resting place of her beloved Danny in the long strip of eucalyptuses across the railroad track. Peter SoSo had joined her this particular morning, but kept his distance. He didn’t know Nancy personally but eventually figured out this must be the grieving lover of the town’s recently deceased plumber. He followed the direction of her repeated, teary stares and glances; understood the tiny Defiance family cemetery recently increased by 1/2 was their focus.

Peculiar talents considered, Peter decided it might be his fate to help the girl. After nightfall he approached the freshly dug grave, attempting to speak with Danny.

“Mr. Defiance,” he whispered. “Daniel,” he tried again, stronger. “Danny,” he then said, with a quick response.

“Yeah?” came a steady but muffled voice. “Is this the Lord?”

“No Daniel… Danny. This is Peter SoSo. You once unclogged my commode… when it was running over. The Grand Lapara Hotel. Room 401. Remember? I’m a merman, if that helps. A former carnie.”

“Yes, I remember. How’s that problem doing? Does it still flush cleanly? You may have to change the piping beneath the floor eventually.” There was a pause. The sound of night bugs began again. Then: “You call me first if you have problems, see. I’ll fix you up.”

Peter SoSo measured the spirit he was dealing with. Not uncommon — the recently departed didn’t quite understand the gravity of their situation yet.

“Yes, I will… definite-ly do that Danny,” he assuaged. “You did a good job before. I’ll remember you. You were… are a fine plumber.”

“Thank you. I am very tired. If you will go away now please.”

So Peter SoSo understood that Danny *could* be brought back if the powers that be were willing. He was very close still. Just down in the grave. Itching to get back to work. He might be able to convince them. Peter made a visit to Pervimus Rex over at the local Gathering Bar just across the mountain range.

“Astarte, eh?” spoke the Northeast District’s judger of souls, sipping on smoking hot coffee. He breathed deep from the aroma. “Yeah, we’ve had trouble in that sim. Demons posing as regular avatars and stealing souls before their time is up. Okay, we’ll agree to send him back. But you’ll have to pay the delivery fee still. 1200 lindens.”

A poorer but smiling Peter then gladly took his leave of the stench filled bar. He’s sure he made the right decision. 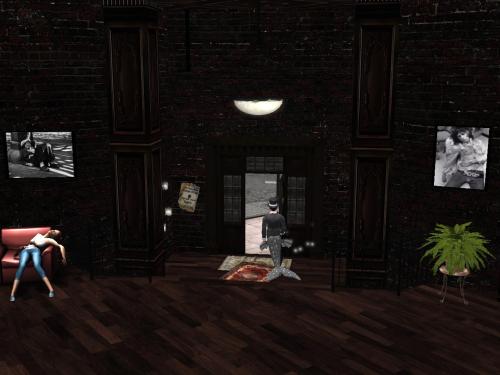