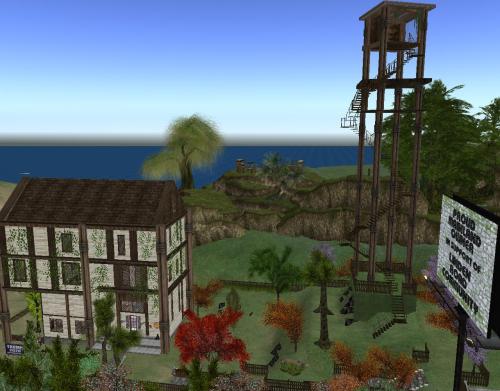 I was going to create a post about figures found near Urqhart, specifically two elephants in opposite corners of a house. But news just broke in Urqhart itself. Urqhart Hill, featured in the Marty-Arthur Kill interaction post from a few nights back, has been bought and paganized! The new owner: a Rhiannon, obviously a nod to Stevie Nick’s song “Rhiannon” in some form, and the Welsh legend behind it of the goddess who fell in love with a mortal and paid the price. Also I’ll remind readers that Barry X. Vampire’s subsequently murdered girlfriend Cathy Love Peace Hippie Child sat her ass on this very hill’s grass as Marty observed her from his house just below. The house still stands despite everything being a bit up in the air at the time. And that observation tower has been added. Let’s zoom in on the modified hill. A memorial? We go deeper…

And here are those elephants in the neighboring Annelie sim just to finish: