Baker Bloch’s father Space Ghost shows up in Collagesity from the woods again. He stops in front of Gloomy Gus. “Helllooo? Son?”

He waits about a minute, then decides to try what he remembers as Baker Bloch’s other house in Collagesity: Home Orange just up the hill. *His* old home. As Space Ghost makes a (typical) wrong turn around the Hole in the Wall bar to get there, he becomes stuck in the 7th and namesake spire of the Castle of the 7th Spire, the same place that Carrcassonnee took her infamous Intense Shower and almost lost an eye as a result.

Unable to free himself, he manages to finally figure out how to text his offworld son after some effort. The message Baker Bloch received was, “Help! Stuck! Hurry!”.

“Just teleport out; use your map,” Baker Bloch told his father after arriving on the scene several minutes later. 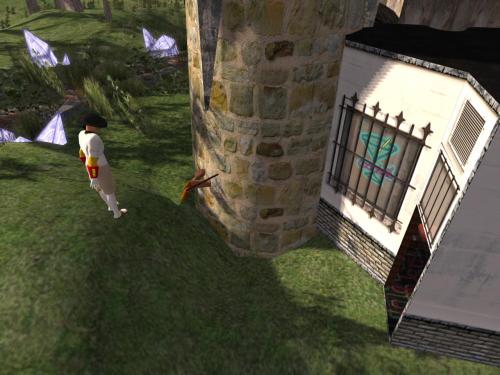 “I don’t know how to do that,” Space Ghost despondently replied, limbs still flailing.

“I can’t find it. Is it next to where I keep my pillows and blankets?”

“Jesus,” Baker Bloch uttered, and tried to go inside the spire so that he could talk to his father face to face. But the phantom prim formerly used to access the shower had been made solid. Baker Bloch swears again with a dirtier word. The f-word. 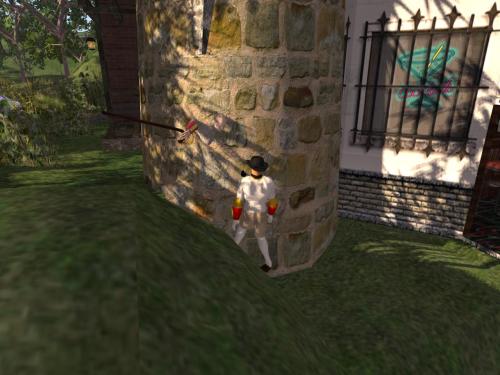 “Now son, I didn’t raise you to use profanity like that. Apologize to the heavens and then get me the heck out of here!”

“Heck is a cuss word too, dad. It’s a euphemism for hell.”

“Okay, don’t panic dad. I have an idea. I”ll just remove the prim if I can’t get it open. But let me try to cut you loose first before I start destroying town relics.”

“Yeah, that worked. *There*! You’re free now old man. Just take a moment. Breath in… breath out. Can you do that with me?”

“Breath in,” Space Ghost repeats with an inhale. “And breath out,” he says and lets it all go in a big exhale.

“Do it again,” Baker Bloch says to his father.

Space Ghost repeats what he did before twice. “There, I think I’m alright son. That was a close one! I almost saw your mother inside, meeting me at the Golden Gates.”

“Well you’re okay now. It will be some time before you join mom up there.”

“Not that long. What if you were offworld doing something that took your user away from the computer? I could have easily died! Anyone else here in this town now? Noone heard my calls for help.”

“We come in as we’re needed,” Baker answers. “Everyone is still here, they just pop in and out. Which brings us to my next question. What are *you* doing here? I haven’t seen you in ages!”

“I’m visiting you, you old fart,” his father answers. “Where’s that girl of yours? The other Baker. Baker Blood. No, that’s not it.” He shakes his head, trying to remember. Baker Bloch helps him out.

“Blinker. Baker Blinker. And she’s not my girl. I don’t have a girl. I don’t even have a you know what. I get that from your side.”

“Oh, that’s not what *I* heard,” Space Ghost insinuates back. “That’s why I’m here. I figured it was that other Baker you might have knocked up.”

“No, we’re not a couple, dad,” Baker Bloch reinforces. “Where did you hear this?”

Night was falling on the Rubi Woods and mainland Second Life as a whole. There was a sudden chill in the air.

“Let’s get you up to Home Orange for some hot beverages. Come along; just follow me. You were going the wrong way up the hill to get there, by the way.”

“Shut up and take me home.” 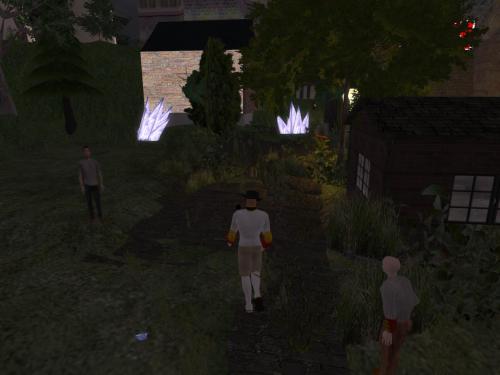 They reached the cannon at the other end of Cannon Road.

“Oh yeah, that old thing,” Space Ghost uttered as they came upon it. “I remember I had to blast aliens with it during the 7 Year Spending Spree War. Damn House of Lemons. Damn that child of theirs. All that trouble over a little kid.”

“The kid who was locked up in the same place you just got stuck in. Seems to mean something, dad.”

Space Ghost became thoughtful as well. “You could be right son. Let’s go inside and I’ll catch you up on where I’ve been. And you can catch me up with your do’ins. How’s that girl of yours? Baker something or another. Not Bloch obviously. That’s your name!”

Baker Bloch suddenly felt great sympathy for his father. “Just through that orange door there, dad. You remember, right?”

“Home sweet home,” the old man said as he passed through the phantom door. 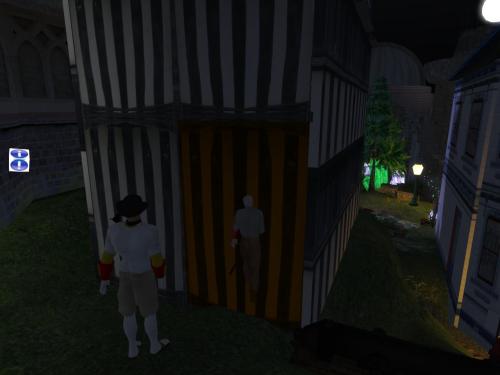