All Hail the Pumpkin King? 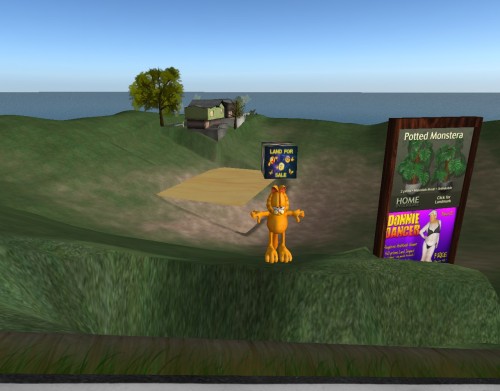 “Tell us about yourself — Elvis wasn’t it?”

“Black,” added Elvis, because he was. “Well, I liked books, no matter how dusty and boring. I’m a learned man. I enjoy truths over falsehoods. I don’t enjoy singing and dancing and womanizing as much as my white counterpart.” He turned the page, because he was reading and speaking at the same time. The word “white” had just been encountered. “That’s about all for now,” he said plainly.

Buster looked over at Bettie and raised his eyebrows. She knew what he was thinking and visa versa. This is Duncan again, playing some sort of trick on them. Or someone *through* Duncan playing a trick. But just because this was another black man… 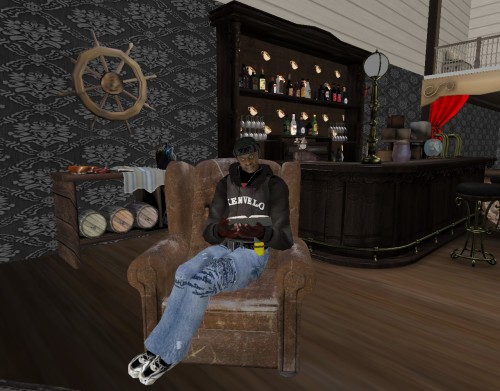 “The South was wrong, you know. Worshiping 2 dimensional cartoon people like Hatfield over 3 dimensional history and facts, no matter how dusty and boring.”

Bettie stopped swinging and looked over at still swinging Nancy, imagining a horn growing out the far side of her head for some reason. Then she attempted to synchronize with her again and soon they were side-by-side.

Bettie later brought the subject up to Buster, turning tiny herself in the meantime. 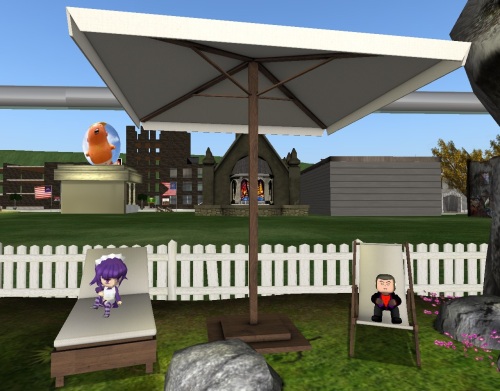 “I’m more focused on the sinks and Lemon vs. Lime.”

“Nancy says that’s related,” spoke Bettie across from him.

Buster sits up while looking in the distance. “Hold on. I think I see Duncan.”

But it was another Black Man. Duncan had been replaced. 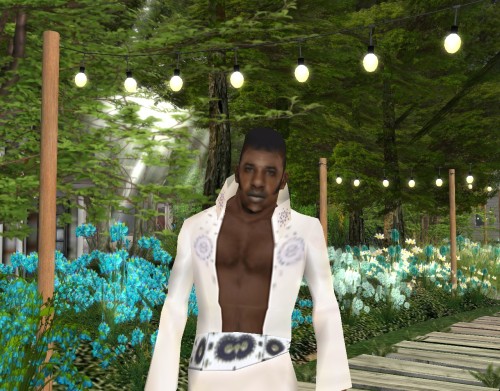 … the sim of Rhodenwald certainly still is, thank God. 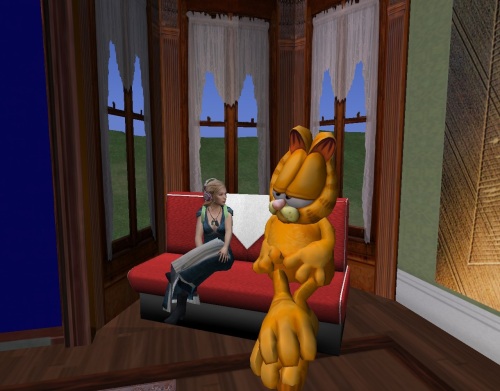 “They’ll really and truly send you up the river for this one if you don’t cooperate, Duncan. Pin the murders on you one by one. Go down the list, create justifications. Is that what you really want?”

“Keep it down, keep it down,” he implored in his cool, grunge voice. “That one we can remake through the leg. Legs are like 11, but, taken apart, 1 apiece. Cloning abilities. But the 12th? Gone.”

“I know — pipe it down. You didn’t do it. Well… that’s the price you pay for being a member of that silly Pot-D. People can use you against your will. You wake up in jail, you wake up in a mortuary, you wake up on a beach, you wake up inside a whale’s mouth. No rhyme nor reason for it. But now there’s a reason. And that’s what *we’re* here for. Pan-Z. Horizontal and vertical are the only directions that will counter diagonal. The Straight is a subsection of The Cross. This is where they meet: this tree lined lane and then the island just beyond. It’s the Mason-Dixon Line all over again. Are you ready to cross into Dixie?”

Duncan glanced over through the cracked rear window of the bus stop. “I do like tree lined roads, granted.”

“Good. Then it’s settled. When you see me again, I won’t look like this.” Then he was gone; winked out.

Duncan thought back to the terrible, horrible revelations Colonel Flagstaff just spoke about on the border of Harrietsville and Arkendale — where The Straight and The Cross supposedly link energies with each other. He could be the 13th. He could be pinned for it all. He could be in the pen forever and ever. He must sign the new contract with a blood filled pen or else: pencil him gone as well.

Filed under **VIRTUAL, Ruby's Empire/Fishers Island^, The Cross, The Straight^

“Volcano island, Indigo. That must be Zebrasil.” Ruby paused. “Or is it Ichelus? Anyway, there’s also these 10 women whose disappearance is associated with 2 more sims: Sylvata and, let’s see, Ribeata. According to this ‘Mole Times’ front page article here at least. So we’ve already found stuff.”

“OMG.” First of many. Ruby doesn’t like spiders. Or tentacles. 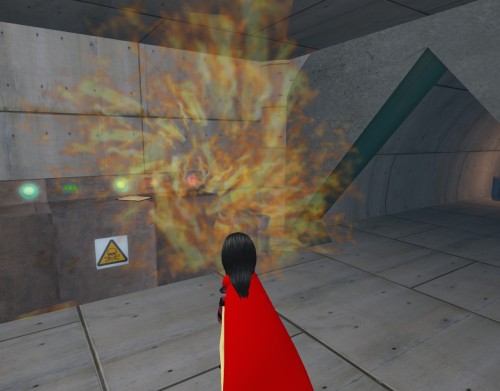 “Interesting. But what does it mean?” (exploding washer)

“At least it warmed up the place,” groused Indigo. “For a split second.” She shivers again. 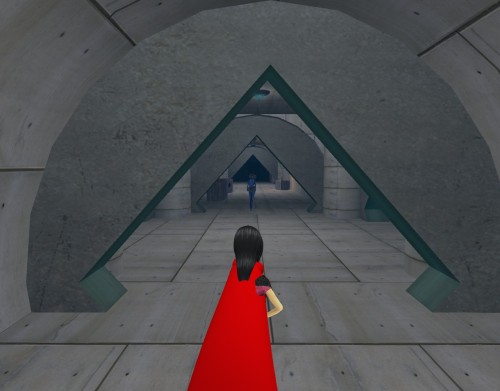 End of Laffoon here, Indigo. And please keep up if you will.”

“More passages to the side before the crossover, though.”

“And more lockers. Let’s just throw them all open at once this time.”

Indigo moves toward the wall and vomits. 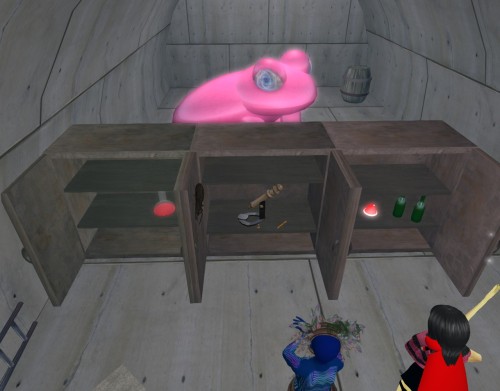 “Sorry about that, Indigo. The santa hat may indicate recent activity, since this is Christmas season. That’s all I’ve got here.”

Their attention shifts northward. They walk to the other end of the corridor. Indigo immediately felt better after leaving behind the frog. 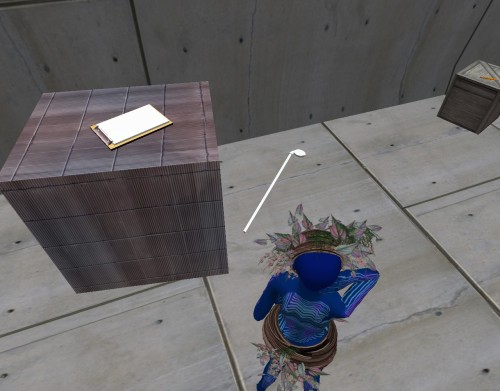 “You put that there,” Ruby accused.

“I put that there,” quickly admits Indigo.

“Stop doing that. This is serious.”

“Big surprise,” asserts Indigo, thinking of some other joke item she could rez. 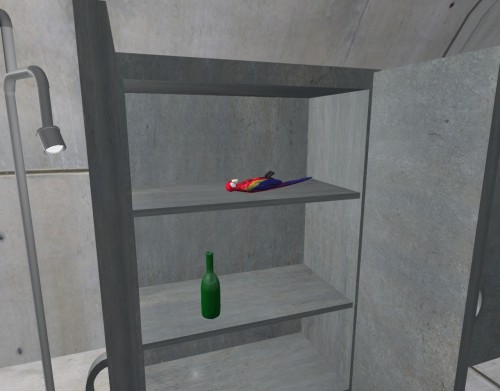 “Another jack pumpkin head and another santa hat (not pictured)… combo of two holidays that don’t mesh well together — I should know. Being Mrs. Claus and all.”

“Ahh. *Finally* Indigo. The mystery is starting to come into focus. Serial killer! Bible must equal code, as in a code to crack. We’ll take these 2 items with us back to Collagesity.” 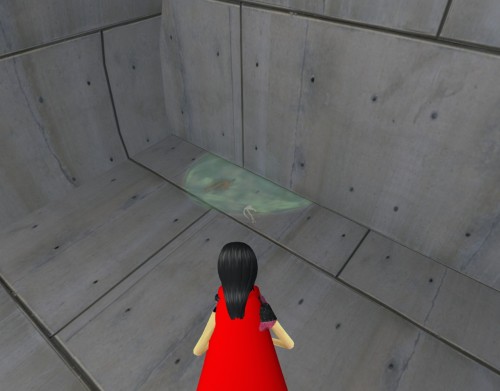 Then Ruby spots something else: a noxious looking puddle. Leaking from the other side.

“O-M-G.” They should have never left the laughs and guffaws of Laffoon.

“So here we are finally, Indigo. Laffoon. Washing machines…

“Rest up, bestest friend of mine. Because we’ve got a big night ahead of us.”