“Karoz, where you been fella? Good to see you. Have a seat, have a seat. What will it be tonight? Still totaling the tea, or do you want anything stronger? Lockfry’s having a beer here, a Krings. Why don’t you join him?”

“No thanks, Karl,” replies Karoz as he moves past Lockfry to his customary seat at the far end of the bar. He inserts a coin. Cards appear. 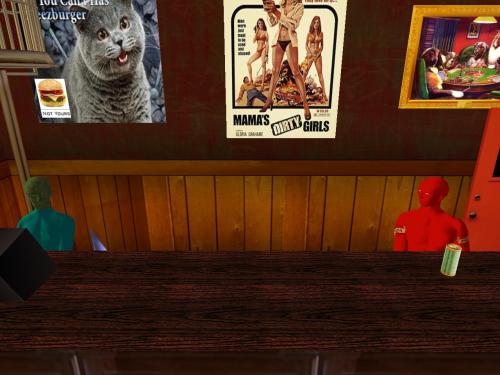 Karoz doesn’t look at Lockfry but just shakes his head. Furry Karl disappears into the back room.

Karoz turns to Lockfry. “Your evil. Pure evil. Everyone’s going to see that soon enough. I’m going out there and get Baker Bloch back. Then we’ll see.”

“Hey look, Karoz,” he says. “I’m going to hang your, let’s see, mother’s picture — right here next to your spot.” With some effort, he hangs the painting. Karoz doesn’t offer to help. “Okay, there, that should cheer you up. She was an awfully pretty lady, Karoz.”

“She wasn’t my real mother, you know,” says Karoz, not looking again. “I was given to her by gypsies. It’s a long story. But, yeah, she was very pretty. Sapphire was her name. When the Linden grid came she and Norum along with her were erased.”

“That when you started hanging out with Peter?” asks Karl innocently. Karoz sneaks a glance at Lockfry. “Maybe.”

Karl hangs the other picture. “And what about this one behind the bar, even? Ah, that might be too much. But that’s both his father and mother now, Lockfry. That’s the only picture Karoz has of both of ’em together. And I think that’s the only one you have of your father, isn’t that right, Karoz?” 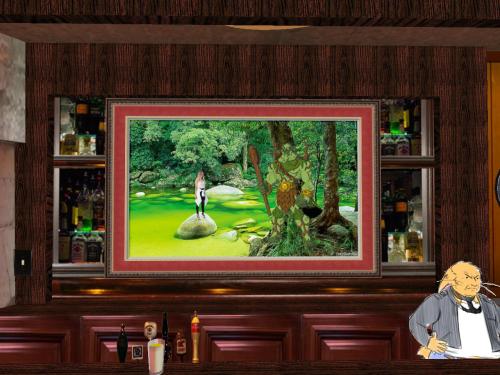 “That might be too much, Furry Karl,” Lockfry reinforces. “It’s like Karoz has the bar all to himself again, like in the old days. That’s not true any longer.”

“Now now, it’s my duty to make you guys happy and content,” Karl inserts here. “All that shooting bb’s in the arm thing is behind us. It was just a frigg’n bb, a toy! And the other Ancient is doing well, Lockfry.”

“He’s not a parrot, Karl”, responds Lockfry. “Why do you keep him in a cage?”

“*Karoz* seems to think I’m evil, Karl. Just because I’m red. Like you know who.”

“No,” says Lockfry firmly. “The other one. The one who lives inside the Sphere Earth instead of on top of it. The hole at the North Pole leads to him, however. That’s what your Admiral Richard Byrd found out and Non-Admiral Floyd Bennett tried to keep from the world until his deathbed. Then he whispered it to his wife and children gathered around him. “I know where hell is, and I’m going there. Now.” Then he died.” Lockfry snaps his fingers here. “And he’s still there in hell. Locked away inside a cage, just like this poor, crippled Ancient.”

“Yeah, that’s a nice story Lockfry. You’ve got a bunch of nice stories and I love hearing all of them. And I don’t think you’re The Devil just because you’re pure evil… *red* I mean there. Red. I’m sure Karoz doesn’t think that either. And certainly Baker Blinker doesn’t see it — *believe* it. Jees.” Karl thinks to himself: “Stop screwing up your lines! You’re going to get *yourself* sent to hell”.

“Karl”, says Lockfry icily. “Don’t I deserve another free Krings for that? Hmmm?” 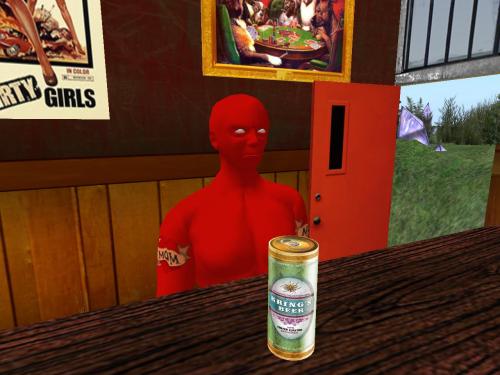