Humorously designed sign at the beginning of a local trail you probably wouldn’t know about unless you’re a devoted mountain biker, since it’s way up a 750 foot knob (The Knob). Not the easiest location to reach by foot.

And on the other side of this same trail: that damn moving gnome. The other day I dared to touch the possibly cursed object for closer examination. It looks to me upon turning it over that the name of the little f-er is Stinkerfoot — logical extension of “…inkerfoot”. 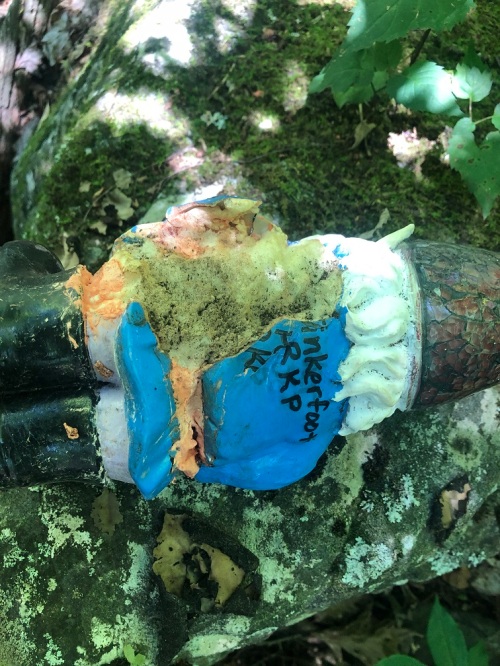 But when googling Stinkerfoot up popped at the top of my search results this video of a song called “Stink-Foot” by Frank Zappa from his most famous album “Apostrophe”, its closing track. This album also contains the well known “Don’t Eat the Yellow Snow” I just referenced in a recent post.

Google also offered to search specifically for Stinkerfoot instead of the suggested Stinkfoot, but upon doing so understood why they substituted the latter in the first place. Nothing really significant found using the former. So there you have it. Zappa works his way back into our story from a direction you might least expect.