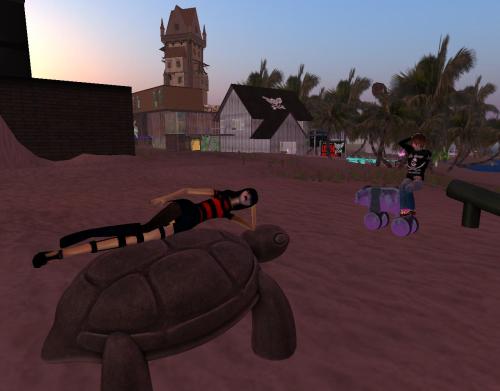 “You should really get something for that itch, Shirley,” spoke Ruby to her new friend while posing on an effigy of island legend Jim Turtle at sunrise, not far behind Bumpy’s Ice Cream Village. “Sand fleas don’t really seem to be bothering anyone else around here that I know of.”

“I think it’s actually a sexual thing. I’ll be 13 in two week; coming of age you know. I look at men — differently now.”

Ruby decides to open up a bit more about a related topic. “My Aunt Annie is looking at men different now too.”

Shirley scratches her left underarm. “What do you mean?” The tomgirl was secretly wondering how old Ruby was and hoping she would tell her, along with also talking about how she feels around boys now. Shirley was guessing: about 15. Old enough to know a lot more than her on the subject.

Ruby considered this, thinking back to Smelly Santy, Tronesisia, and the rest at API. “Yeah, I guess it’s not too much different. No Hazel tonight thankfully. Thank you for coming with me.”

Shirley was scratching the top of her hinny now. “No problem, my fellow New Islander. *Lady* New Islander. We girls here must stick together. Against all those men.”

Ruby knew what she meant. Objects, hmph. Like we were made of plasticine or something. Movable, bendable toys. Annie was just joining the crowd, doing what Romans do or whatever the expression was. She was falling into the rhythm and beat of the land, Ruby then thought and was pleased she came up with the phrasing. “Do you think this island has a pulse?” Ruby tried to reword it in better terms. “You know, like a, um, fundamental *tone*?” Ruby rolls over on the turtle and looks directly at Shirley Boot now, gauging her expression, the green terrain of what would later be known as Pimushe Isle jutting out of the sea in the background.

“Sea,” Shirley then uttered out of the blue without consideration.