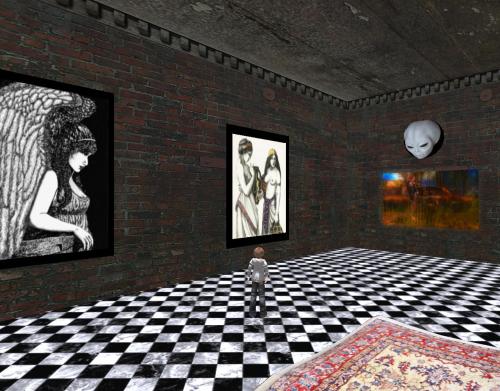 George stood on 97/97 and looked at the picture of the couple and thought about All Orange. He grew maybe 6 inches overnight thinking about the thing. He was in danger of being absorbed, 13 to 10 to 13 and back and back and back, over and over. Duncan Avocado needed to keep a better eye out on him, but he had his own, rather similar problems. Tulips. How did they move that way? Why is that one red and why is that one over there purple but in the same bunch? And the rats. Don’t get him started about the rats. They make the stems, leaves and flowers move in mysterious, dark ways. He wonders if there are any rats in the Fortress — probably are, he rationalizes. And if not, maybe something else.

“How old are you?” Duncan queried about the lateness for dinner over the phone.

“13,” George admitted, and thought about the added height. How to get rid of it? How to convince Duncan A. he was still just an innocent boy at the heart of it all.

“Get – home.” Duncan hung up. He knew George was nearby. Phone service was spotty in the countryside, and George’s voice rang clear as an Alexander Graham Bell. Probably visited that gallery, hmph, he thought. Stood on the site of the former black hole and let it have its way, dark powers still tappable. 13 to 10 to 13 and on and on, spiraling out of control. He felt his own heart, and realized that innocence lost is innocence lost. For everyone except George.