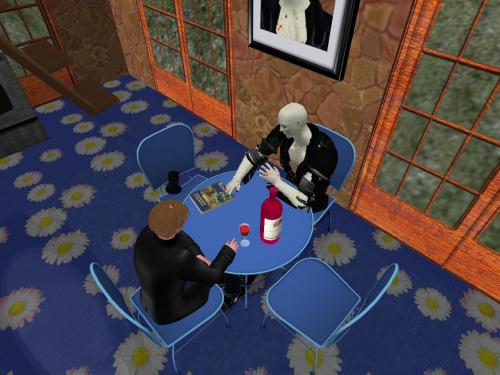 Wheeler was tiring of the chit chat. “You said you had something important to tell me.”

Wheeler looked down at Pitch Darkly’s extended hand. “If you mean wine, I’m good. So spill.”

“It was such a good name I couldn’t wait. Hope I didn’t interrupt anything over at… where did you say you were?”

“Oh all right.” He put his hands behind his head and made the announcement. “It’s Silver. I’m sorry (!): Sister.”

“What is?” Wheeler asked.

“The sim. The name of the sim we, I, couldn’t determine before. It’s really clever. Want to hear my logic?”

“Oh sure. I’m here. Drinking suspiciously viscous wine with you.”

“Well, first off, the sim in question is kind of the sister to Bemberg. Together they hold about 80, maybe 90 percent of VHC City. The town’s kind of split between them. Brother and sister, maybe.”

He removed his hands from his neck and leaned forward. “Now here’s where it gets really clever. Take the last six letters of the actual name, rearrange them — not adding or subtracting any letters — and you, voila, get Sister. Go ahead and try it.”

Wheeler worked the problem out in her head; took her a moment. “Okay, that’s kind of cool, admittedly — starting to make more sense.”

“And there’s more. Has Chuckles told you about the Seven Sisters yet?” He nodded his head in the direction of the perpetually reeling fisherwoman outside. 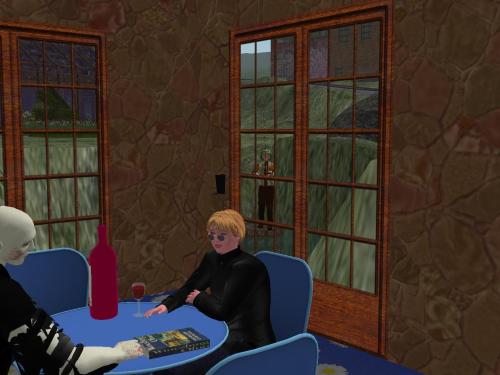 “I don’t think so,” Wheeler said without turning around to look as well. “What are they?”

They’re pools in the sim I’m rather insisting we now call Sister. You have to go through the blue door. The Musician may have already found them. Anyway, you pass through that door and soon you are upon an inundating, grassy plain dotted with these small pools. Trouble is, there are only six pools out of seven present now. The seventh is gone. The seventh *sister* is missing. Where is it? is what I’m asking. What is it? Can you guess?”

Wheeler scrunched her mouth up, indicating she couldn’t.

“Black horse. Oh, drat, sorry again, black *hole*. I’ll quote to you from a famous music song directly related to all this. Let me make sure I have it right — wrote it down in preparation.” Pitch Darkly pulls out a piece of paper from his ragged black coat and reads:

In the constellation of Cygnus
There lurks a mysterious, invisible force
The Black Hole of Cygnus X-1
Six stars of the northern cross
In mourning for their sister’s loss
In a final flash of glory
Nevermore to grace the night

Pitch Darkly then stabs the paper on the table several times with his forefinger. “The Oracle indicated this.” 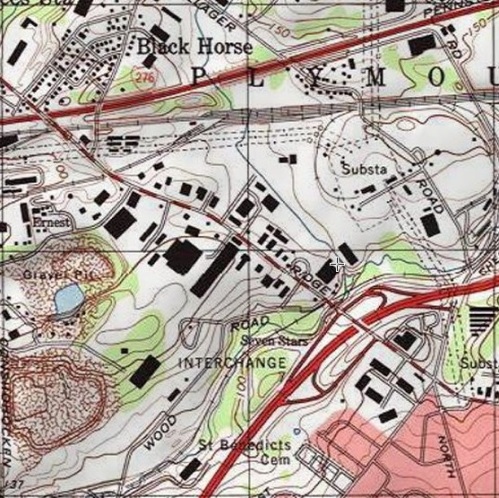 Meanwhile, The Musician had moved through the pools called Seven Sisters and up a sewer ladder giving access to a green wall marking the southern line of the property formerly known as Pitch Black. “What was hidden by Harrison Head before is now exposed,” he said in a confident voice, looking at this similarly green picture at its east end and thinking back to the new collage called “The Point of It All” he had seen earlier in Bemberg’s Clown Central.

“The monster swallowing its own tail; perpetual. Cardboard Derek Jones was right all along (about Greenup).” 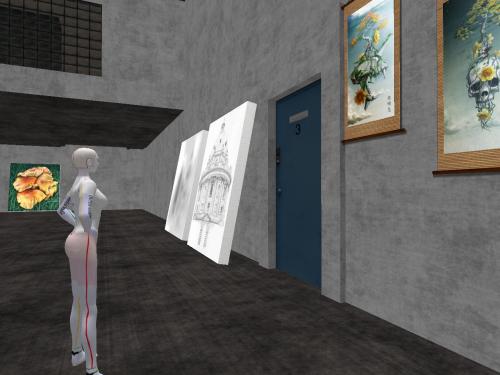